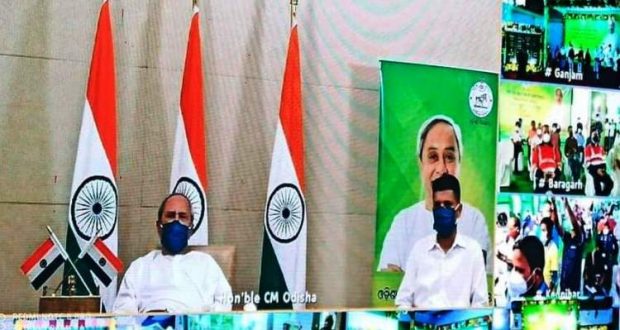 The foundation stones were laid via video conferencing, said an official press release.

In addition to the laying of foundation stones, the Chief Minister inaugurated a 12-bedded Special Newborn Care Unit at the Berhampur City Hospital, Dialysis Unit at Bhanjanagar, a new Primary Health Centre in Kukudakhandi block and a new Community Health Centre in Digapahandi block.

Speaking on the occasion, the Chief Minister while, thanking doctors, health workers and other Covid warriors informed that while there has been improvement in the situation in the second wave, the situation in some coastal districts is fluctuating.

Similarly, experts have different opinions on the third wave and in addition to that the delta plus variant of the virus has been observed in some States, he added.

Therefore under no circumstances, there should be any negligence in our preparedness, Patnaik opined.

Patnaik while seeking cooperation of the people in observance of Covid rules and vaccination stated that by now more than one crore doses of vaccine have been administered.

While expressing that he has always emphasized on livelihood with life, he informed that the government has recently announced a package of 1690 crore for the poor and the farmers.

The Chief Minister while informing that work on installation of LMO and PSA plants has already started in 15 districts, said that foundation stones for eight more was laid today.

He sought cooperation of the people in the endeavour of the State government to provide better service.

Participating in the programme from Berhampur, Speaker of the State Assembly Surjya Narayan Patro stated that today is a great day for Ganjam. He threw light on the various steps being taken in Ganjam district for improvement of health infrastructure.

The MPs and MLAs from different districts attended this programme.

2021-06-24
Editor in chief
Previous: Nuclear Capable Subsonic Cruise Missile Nirbhay Test-Fired From ITR Chandipur
Next: Life Is Nothing But The Stories We Tell Ourselves