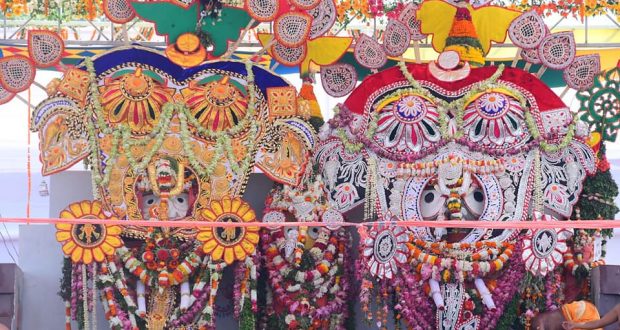 in District Diary, State News June 24, 2021 Comments Off on Lord Jagannath – the Lord of Universe – appeared in Gajanan Besha on the auspicious occasion of Deba Snana Purnima 554 Views

Puri:24/6/21: Lord Jagannath – the Lord of Universe – appeared in Gajanan Besha or Hati Besha on the Snana Mandap on premises of Srimandir on the auspicious occasion of Deba Snana Purnima today without physical presence of devotees this year too due to COVID pandemic.

Lord Jagannath and His Holy Siblings were adorned with Gajanan Besha after holy shower on the Snana Mandap, situated near Ananda Bazaar on the Jagannath Temple campus in the morning. 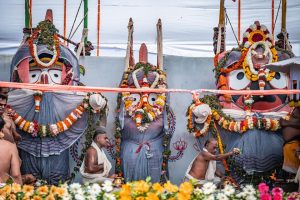 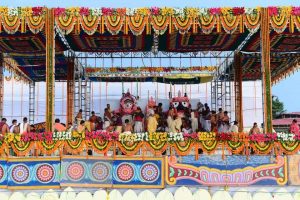 Later, the servitors changed the wet clothes of deities and decorated them with flowers and Tulasi (Holy basil). Mudirasta or Mudi Ratha, the representative of Puri King Gajapati Dibya Singh Deb, offered prayer to deities and performed chhera pahanra (sweeping of floor) at the pandal, one of the major rituals, ahead of the Gajanan Besha, with priests chanting hymns.

The costumes of deities for the Hati Besha were prepared by the artisans at Raghaba Das mutt and Gopal Tirtha mutt. The Gajanan Besha of Lords was completed by 12.45 PM.

2021-06-24
Editor in chief
Previous: OPEC estimates India to be the fastest-growing economy in 2021
Next: Odisha government effected a major reshuffle in senior IPS cadre