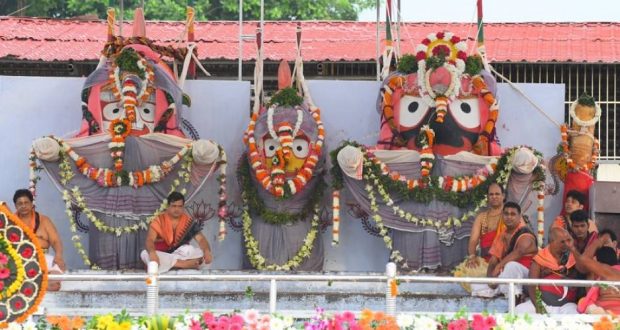 in District Diary, State News June 22, 2021 Comments Off on Puri district administration has decided to impose 144 of Cr PC for the smooth conduct of Snana Yatra 335 Views

Puri:22/6/21: In a bid to prevent congregation and movement of public due to Covid pandemic, the district administration has decided to impose prohibitory orders under section 144 of CrPC for the smooth conduct of Snana Yatra (divine bathing rituals of Lord Jagannath and his siblings) scheduled to be performed on June 24.

The restriction will come into force at 10 pm on June 23 and will continue till June 25, Sub-collector Bhabataran Sahoo informed. Unauthorised persons will not be allowed to enter Puri during the period. Violators will be strictly dealt with, he added.

In view of the Covid pandemic, the decision has been taken to conduct the ceremonial bath of the trinities without public participation, warned he.

The administration appealed to the residents of Puri and devotees to cooperate with the temple authorities for a hassle-free event of the sibling deities.

People can witness the entire rituals through TV as the Information and Public Relations Department will videography the festival and share the feed with various channels. Elaborate security arrangements will be made for mega sacred events.

The servitors, temple officials, and district officials who are scheduled to take part in the mega event will undergo the RT-PCR test. Those who are found negative will be allowed to participate in the grand rituals of the holy trinity.

The Sri Jagannath Temple Administration (SJTA) had earlier decided to conduct multiple round of RT-PCR tests on servitors and officials before Ratha Yatra.

The testing will be done in four stages – before Snana Yatra, before Gundicha Yatra, before Bahuda Yatra, and finally, 15 days after Niladri Bije. The Ratha Jatra is scheduled for July 11, SJTA chief administrator Krishan Kumar had informed earlier.

The famous boating festival or Chandan Yatra of the Lord was also held without public participation amid strict adherence to covid protocols. Section 144 was also clamped around the Narendra Puskarini for the mega festival this year in May.

2021-06-22
Editor in chief
Previous: AICTE has revised its academic calendar for the session 2021-22.
Next: Birendra Lakra has been chosen for the Vice Captain’s in Olympic-bound Indian Men’s Hockey Team