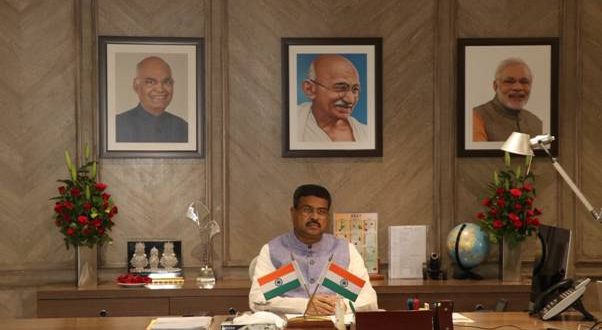 in National June 21, 2021 Comments Off on Abundance of natural resources, human capital and aspirational population will help create a tech-enabled manufacturing ecosystem in eastern India 259 Views

Newdelhi:21/6/21:Minister of Steel & Petroleum and Natural Gas Shri Dharmendra Pradhan today addressed the webinar on “Making Eastern India a Manufacturing Hub with respect to metallurgical industries”, organised by the Indian Institute of Metals. The Webinar was attended by the experts from the metals sector, officials of the Ministry of Steel, and state government representatives.

Shri Pradhan, speaking on the occasion, said that Hon’ble Prime Minister Shri Narendra Modi is working on the mission to bring eastern India at par with other developed regions of the country. With a skilled human capital, an abundance of natural resources, and an aspirational population, eastern India is poised to create a tech-enabled manufacturing ecosystem. He said that very few nations are blessed with the abundance of natural resources as much as eastern India is. He spoke in detail about the Mission Purvodaya launched also in the steel sector and its potential to spur a new era of development in the eastern India. He also spoke about efforts made by the Government of India in giving a boost to logistical infrastructure in eastern India including inland waterways. Shri Pradhan spoke about the rich heritage of architecture, maritime economy, and also industrial development in eastern India and said that time has come to reclaim that glory.

Speaking about Industrial Revolution 4.0, he said that we must seize the opportunity and create new, innovative and sustainable business models.

2021-06-21
Editor in chief
Previous: Government of India in collaboration with WHO has developed M-Yoga Mobile App
Next: Paradip Port Trust celebrates International Day of Yoga