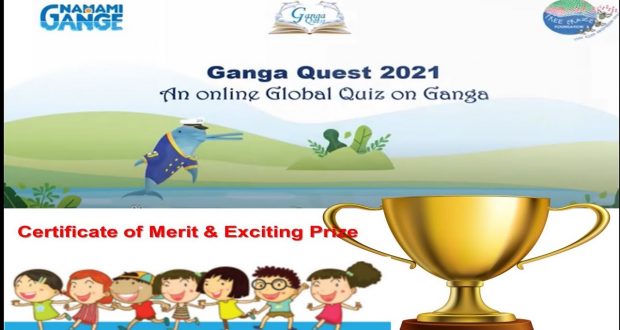 Results of Ganga Quest 2021 Announced on Occasion of Ganga Dussehra

in National June 20, 2021 Comments Off on Results of Ganga Quest 2021 Announced on Occasion of Ganga Dussehra 296 Views

Newdelhi:20/6/21:The final results of Ganga Quest 2021, an online quiz contest, were announced today on occasion of Ganga Dussehra. The Union Minister for Jal Shakti, Shri Gajendra Singh Shekhawatcongratulated and felicitated the winners. Ganga Quest is an online quiz contest &an educational program to sensitize children and youth on Riven Ganga& other rivers of India and the environment. The quiz was organised by National Mission for Clean Ganga, Jal Shakti Ministry in association with Tree Craze Foundation.

Shri Gajendra Singh Shekhawatinteracted with the winners and the volunteers who are working on the ground to strengthen the Namami Gange program. Shri Shekhawat asked the volunteers for feedback to further strengthen the program. He said, “The physical infrastructure (like STPs, Ghats and crematoriums, etc) built under Namami Gange can be seen by all, but the far bigger achievement is of reviving people’s awareness and devotion towards the sacred Ganga.” He added that just considering our rivers as goddesses will not serve any purpose if that doesn’t reflect in our treatment of rivers. We have to take responsibility. The Minister complimented the efforts of NMCG, TCF and all volunteers and community-based agencies such as Ganga VicharManch, Ganga Doot, Ganga Mitras, Ganga Praharis, GTF, etc and several organisations and appealed to continue and organise a drive in their own organisation for keeping Ganga, other rivers and water bodies healthy.

The winners shared their experience of participating in the quiz. Some shared that they have become more sensitive towards the environment after preparing for Ganga Quest. Few participants said they feel a sense of devotion towards not just Ganga but all rivers of the country because of what they learnt during the quiz. They also shared that while they were participating, their family members and friends also took an interest. Click here to view Winners List

Mr. Xavier Chauvot de Beauchene from World Bank encouraged the winners to continue contributing towards conservation of environment by becoming agents of change. He said, “Youth are social media savvy and can become ambassadors of Ganga rejuvenation.” He congratulated NMCG & TCF for making it possible to reach out to more than 100 countries and more than one million participants. He recollected the progress NMCG has made in river rejuvenation.

‘Strategic Guidelines for Making River Sensitive Master Plans’ prepared by NMCG in association with National Institute of Urban Affairs (NIUA) was released at the event. Mr. Victor Shinde, Director NIUA briefed the audience about this master plan. He said the thought behind the plan was that most of the pollution in a river is caused by cities along its banks. “If cities are the part of the problem, they have to be a part of the solution,” he said. He shared that the elements of these guidelines have found place in the draft MPD 2041 for Delhi.

Ms. Bhawna Badola, CEO, Tree Craze Foundation explained the details of Ganga Quest and its diversity, champions among schools and teachers, and also schools with maximum participation. She made a presentation on Continuous Learning and Activity Portal (CLAP). CLAP is a learning portal that will be buzzing with activities, quizzes, crosswords, discussion forums to keep children engaged throughout the year. The objective of all the activities will be to sensitize and motivate the children and youth for action to protect and restore our rivers.

Keynote address was given by Shri Pankaj Kumar, Secretary, Ministry of Jal Shakti. He congratulated the winners and gave best wishes to all on Ganga Dussehra. He said the launch of guidelines for river centric master plans is a very significant step towards river conservation. Shri Rajiv Ranjan Mishra, Director General, NMCG shared that enthusiasm towards Ganga Quest has increased over the year. He informed that this year 1.1 million people registered for the quiz from 113 different countries.  He said, “We could also reach out to remote areas of the country. Similarly, making master plans river sensitive will improve the river city connect and help both – cities and rivers to have sustainable growth.”

The event was watched live by more than 7000 people from across the world including from countries like Belgium, Austria, Netherland, Sweden and Germany, etc.