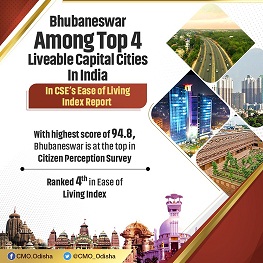 in Smartcity Bhubaneswar, State News June 19, 2021 Comments Off on Smart City Bhubaneswar has ranked fourth in the top 10 livable capital cities in the country 377 Views

Bhubaneswar:19/6/21: Smart City Bhubaneswar has ranked fourth in the top 10 livable capital cities in the country. And, it topped the Citizen Perception Survey with the highest score of 94.8 out of 100.

As per CSE’s Ease of Living Index report, Bengaluru is the top-1 livable capital city in India followed by Chennai, Shimla, and Bhubaneswar.

Four parameters were used to determine the score on the Ease of Living Index: quality of life, economic ability, sustainability, and citizens’ perceptions. The cities were given scores on all four parameters out of 100. However, the index did not rank four capital cities: Dispur, Daman, Amaravati, and Kolkata.

Chief Minister Naveen Patnaik extended his greetings for the achievement.