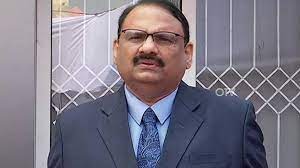 in State News June 19, 2021 Comments Off on Director of the Odisha Vigilance Directorate, Debasis Panigrahi, breathed his last 357 Views

Bhubaneswar:19/6/21: Director of the Odisha Vigilance Directorate, Debasis Panigrahi, breathed his last around 10.15 pm on Friday while undergoing treatment for COVID complications at a super specialty hospital in Kolkata.

Panigrahi was admitted to Ashwini COVID Hospital in Cuttack on May 29 after being diagnosed with the virus. He was shifted to the ICU and then kept on a ventilator after his condition deteriorated on June 7 despite him being fully vaccinated in April.

After his condition deteriorated and he developed complications, including inflammation of the lungs, doctors advised ECMO (extracorporeal membrane oxygenation) treatment.

On June 8, a green corridor was created between Cuttack and Bhubaneswar, covering a distance of 30km, to ensure the smooth passage of the ambulance carrying the ailing 1991-batch IPS officer to the Biju Patnaik airport and he was airlifted to Kolkata.

Born on August 29, 1965, in Balasore, Panigrahi graduated in Political Science and did MPhil from JNU and later Ph.D. He was quite famous in the bureaucratic circle for his literary works. He assumed office as Director Vigilance in October 2017.

Dr.Debasis Panigrahi was a popular and critically acclaimed writer of short stories, short fiction, novella and novel from Odisha, an eastern state of India. He writes in Odia, a regional language, which because of its great antiquity and rich literary heritage, has been accorded the status of a classical language of India. He has so far published nine collections of short stories, seven novellas published in three collections, and one novel.

He is also a reputed lyricist and has penned popular lyrics for audio and video albums, television, and cinema.

His stories figure in the anthologies of best Odia stories brought out by ‘Kendra Sahitya Akademi’ and ‘Odisha Sahitya Academy’.