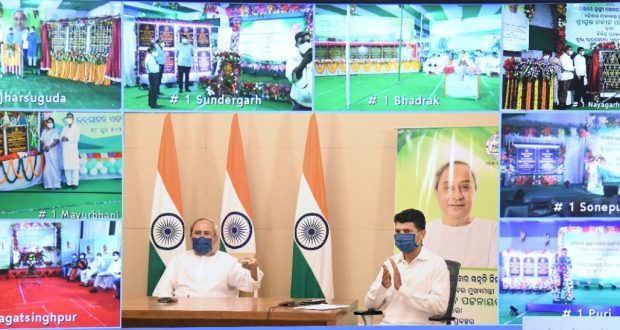 It may be mentioned here that while it is targeted to set up 20 PSA oxygen generation plants in the State, foundation stones for seven were laid on June 9 and eight today.

These 20 PSA oxygen generation plants can generate 24,000 litres of medical oxygen per minute.

Speaking on the occasion, the Chief Minister said that now there has been a remarkable improvement in the Covid situation in the State.

Still, we need to be more careful, he added. While informing that experts in some States have cautioned on the third wave, he advised remaining fully prepared for the same in our State.

In addition to this, the Chief Minister has appealed to the people to wear a double mask and definitely get vaccinated.

Patnaik thanked all doctors, health workers, ASHAs, and Anganwadi workers for their work and sacrifice in the fight against Covid.

The Chief Minister firmly believed that Odisha and the human race as a whole will surely win in the fight against Covid.

Participating in the programme from different districts, Ministers Naba Kishore Das, Niranjan Pujari, Pratap Jena, Samir Ranjan Dash, Raghunandan Das, Rajya Sabha members and MLA were of high praise for the foresight of the Chief Minister in the fight against Covid.