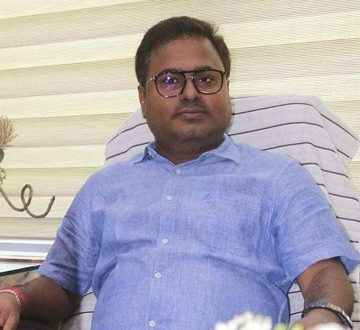 Balasore:!7/6/21: Managing Director of Satya Sai Engineering College, Balasore, and youth leader Dr.Benu Madhab Panda passed away while undergoing treatment at a private hospital in Hyderabad on Wednesday. At the age of 38.

Panda is survived by his wife and little son, Dr.Benumadhab Panda was born on 14th, May 1983. Mr. Panda was an ambitious  MBA alumnus of  SAI  PRASANTI  NILAYAM UNIVERSITY, ANDHRA PRADESH. As a science graduate, he had a sincere desire to be an Engineer but during this time there was no good Engineering College in his home district Balasore  So he always dreams to bring out a new era in technical education in his home district.

Mr. Panda is the son of a veteran politician and Ex-minister Padma Lochan Panda who had represented as an MLA from Simulia from Odisha in the district of Balasore. When his father founded Satyasai Engineering College in Balasore during that time Dr. Benu Madhab Panda had quit his lucrative Bank job to carry out his father’s dream in true shape. He does not only promote education in North Odisha as a MANAGING DIRECTOR OF SATYA SAI GROUP OF INSTITUTIONS, but also as a socialite involved in various social activities. Live and let live was the motto of his life.

Dr. Panda’s was is not only spread technical education across the state but also help the poor and brilliant student to provide education in his group of the institute is free of cost. For his excellent contribution to education, International Peace University of  Germany has conferred Honorary Doctorate Degree in the year 2019

International: For his excellent contribution to education International Peace University of    Germany has conferred Honorary Doctorate Degree in the year 2019