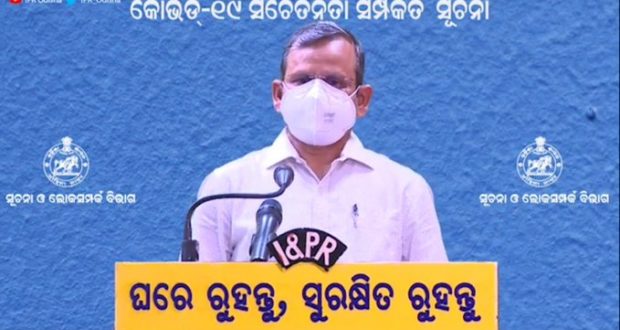 in State News June 16, 2021 Comments Off on Odisha government decided to extend partial lock down entire State till July 1 292 Views

Bhubaneswar:16/6/21:The Odisha government on Wednesday decided to extend partial lockdown entire State from 5 a.m. on June 17 until 5 a.m. on July 1. The lockdown was enforced on May 5 after the second wave of the pandemic hit the State.

During this period, shops for essential goods will be allowed to open from 6 am to 5 pm in 17 districts of the southern and western part of the state where the positivity rate is 5% or less, Odisha’s Chief Secretary Suresh Chandra Mahapatra said in a statement.

For the 13 coastal districts and the districts with a higher positivity rate, the shops for essential goods will open from 6 am to 1 pm, he said.

In Odisha, the street vendors have also been allowed to operate with take-away only, in districts where the positivity rate is 5% or less.

The Odisha government has also permitted essential services, transportation of goods, industrial activities, and construction activities. However, the public bus service will not be running.

According to the government order, shops selling essential goods will remain open from 6 a.m. to 5 p.m. on weekdays in 17 districts in the State’s southern and western regions, where the test positivity rate was 5 per cent or less. Street vendors selling take-away packets will be allowed in these districts from 6 a.m. to 5 p.m. The 17 districts are Sundargarh, Jharsuguda, Bargarh, Sambalpur, Deogarh, Kalahandi, Balangir, Nuapada, Subarnapur, Ganjam, Gajapati, Kandhamal, Boudh, Koraput, Nabarangpur, Malkangiri and Rayagada.

The government said that the lockdown was primarily aimed at restricting movement of people and not the movement of goods. Hence, goods carriers will not be affected by the lockdown, it said.

Keeping in view the livelihood of milk farmers, the government announced that all sweet shops will remain open in all the districts in the window period allowed for each district. Garages, vehicle and bicycle repair shops will also be allowed to operate during the window period.

While railway stations, airports and sea ports will operate as per the Centre’s guidelines, plying of buses for public transport, taxis, auto rickshaws and cycle rickshaws will remain prohibited until July 1, the government order said.

All restrictions regarding marriage, cremation, meetings, and social gatherings would continue. Entry to the temples will remain prohibited, as per the government’s order.

Parks and gyms will remain closed during the lockdown period, but morning walks and jogging will be allowed.

Keeping in view the livelihood of milk farmers, the government has decided to open sweet shops. However, they will only be allowed to give parcels,” Mahapatra said.

The district administration, police and municipal authorities have to ensure strict compliance of COVID-appropriate behaviour and regulate crowd in all busy market places. Necessary action should be taken to prevent misinformation and panic in the community, the order said.

The state registered less than 4,000 fresh infections for the second consecutive day after mid-April.

The state’s coronavirus death toll has climbed to 3,432, as per its daily health bulletin.

2021-06-16
Editor in chief
Previous: Not To Be Allowed devotees At Shree Jagannatha Temple Till July 25
Next: Odisha Chief Minister said that the government will invest more than Rs 8500 crores on health infrastructure