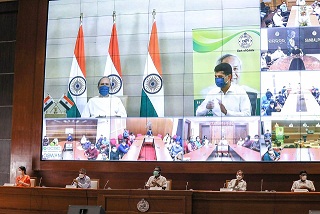 in State News June 16, 2021 Comments Off on Odisha Chief Minister said that the government will invest more than Rs 8500 crores on health infrastructure 258 Views

Bhubaneswar:16/6/21; The Chief Minister of Odisha, Naveen Patnaik on Wednesday said that the State government will invest more than Rs 8500 crores on health infrastructure. Patnaik said this today while interacting with 786 newly appointed doctors who were recently selected through OPSC.

Appreciating doctors’ role in the current pandemic, the CM said that doctors have a special respect in society. People look at Doctors like Gods especially when it’s a life and death situation. The current Covid pandemic has transformed Doctors into warriors.

Congratulating the young doctors, on virtual platform,  for choosing a life of public service the and successfully getting selected as the Medical Officer, the CM said that it’s a landmark in their life, which they achieved after years of sincere hard work and academic excellence.

Making a cautionary remark, he said that the fight against Covid is far from over. You are all joining during very challenging times in the midst of the second wave in the country.

‘I hope all of you will get inspired by such examples and show empathy for the citizens in need,’ he encouraged the young doctors.
ACS Health Shri P.K. Mohapatra spoke about the initiatives taken for improvement of health infra in state. He said that the Shri Jagannath Medical College at Puri will function from this year. He further said that till 2024, Odisha will add two medical colleges each year.