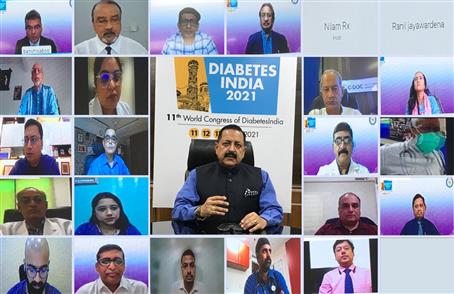 in Health, National June 11, 2021 Comments Off on Union Minister & a renowned Diabetologist Dr Jitendra Singh called for Public Awareness Campaigns about the co-relation between Diabetes and COVID 201 Views

New Delhi:11/6/21: Union Minister Dr. Jitendra Singh, who is also a former Professor of Diabetes and Medicine besides being the Life Patron of the coveted RSSDI (Research Society for Study of Diabetes in India), said today that there is a need for more public awareness about the correlation between Diabetes and COVID, as there are certain misgivings about the cause and effect relationship between the two.

Delivering the inaugural address, as chief guest, at the ” Diabetes India” World Congress-2021, Dr Jitendra Singh said, like in many other fields, even in academics, COVID has prompted us to discover new norms in adversity, which is visibly evident in the success of an international conference like this of such a big magnitude.

Dr. Jitendra Singh said, over the last two decades, India has seen a surge in Type 2 Diabetes Mellitus, which has now acquired pan-Indian proportions. Type 2 Diabetes, which was till two decades ago prevalent mostly in South India, is today equally rampant in North India and at the same time,it has also moved from metros, cities and urban areas to the rural hinterland.

He also flagged off the need for a series of COVID-Diabetes academic meets to create awareness.

While Corona has taught us to live with new norms, Dr. Jitendra Singh said, it has also given the physicians a cue to emphasize on the various pharmacological as well as non-pharmacological methods of management, which had somehow lost due importance in recent years. He noted, even after the COVID pandemic is over, the discipline of social distancing and avoiding droplet infection will act as a safeguard against many other infections, particularly for those who have underlying Diabetes.

Dr. Jitendra Singh said, those suffering from Diabetes have an immuno-compromised status, which tends to reduce their resistance and make them more vulnerable to Corona-like infections as well as consequent complications. This, he said, may lead to vulnerable situation when a patient suffering from Diabetes also has kidney involvement or diabetic-nephropathy, chronic kidney disease etc. However, he hastened to add that there is no room for panic, because the basic rules of strict glycemic control of blood sugar levels and safeguards against target organ damage, which are otherwise also practised in diabetes, are equally applicable even during the pandemic.

Dr. Jitendra Singh emphasised, what is important to understand is that while every diabetic need not necessarily get COVID, at the same time every COVID infection may not necessarily lead to complications in case of a diabetic.

Dr. Jitendra Singh also fondly remembered Founder President of DiabetesIndia Late Prof. Shaukat M. Sadikot and said that his legacy continues with the aim to spread education and awareness about Diabetes in India.

In his address, Dr Akhtar Hussain, President-Elect, International Diabetes Federation said that India is the second most affected country after China so far diabetes is concerned and the number of patients are witnessing a continuous surge in the past few years. He also warned that in the post COVID era, complications are going to grow.

Dr Jitendra Singh also virtually presented awards to several doctors from all parts of the country for their pioneering work in the field of Diabetes. He complimented renowned Endocrinologist Dr Shashank Joshi from Mumbai, Dr. Banshi Saboo from Ahmedabad, Dr Anoop Mishra, Trustee Diabetes India, Dr S.R. Aravind, President Diabetes India and the entire team of organizers for having brought together the best of faculty from as many as four continents of the world.