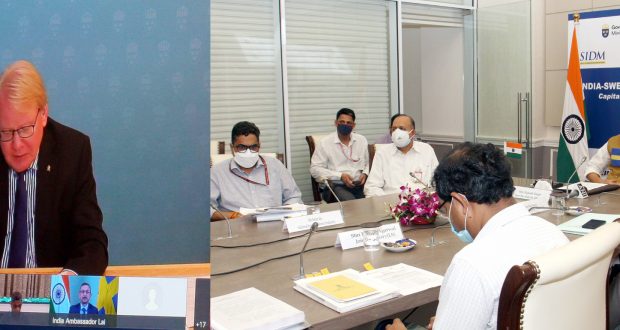 Newdelhi:8/6/21:NA webinar on India-Sweden Defence Industry Cooperation, with the theme ‘Capitalizing Opportunities for Growth and Security, was organised on June 08, 2021. It was organised under the aegis of the Department of Defence Production, Ministry of Defence through the Society of Indian Defence Manufacturers (SIDM) and Swedish Security and Defence Industry (SOFF). Raksha Mantri Shri Rajnath Singh was the Chief Guest, while the Defence Minister of Sweden Mr Peter Hultqvist was the Guest of Honour. Ambassador of India to Sweden Shri Tanmaya Lal; Ambassador of Sweden to India Mr Klas Molin; Defence Secretary Dr Ajay Kumar, Secretary (Defence Production) Shri Raj Kumar; other senior officers of Defence Ministries of the two countries; representatives of Indian & Swedish Defence Industries and officials of SIDM & SOFF also attended the webinar.

In his inaugural address, Shri Rajnath Singh listed out several progressive policy and procedural reforms undertaken by the Government, under the leadership of Prime Minister Shri Narendra Modi, that have transformed the defence industry to meet domestic as well as global demand. The motto of ‘AatmaNirbhar Bharat Abhiyaan’ is ‘Make in India’ and ‘Make for the World’, he said, adding that the campaign envisages the defence sector to play a major role in India’s economic growth and focuses on manufacturing cost-effective quality products for India and for the world.

On the Defence Acquisition Procedure (DAP) 2020, the Raksha Mantri said it encourages domestic manufacturing and has provided a strong foundation for India to emerge as the defence manufacturing hub. He highlighted that policy decision such as FDI liberalisation and improved ease of doing businesses are attracting top defence companies of the world and have Joint Ventures establishments in India. Ease of FDI regulations and introduction of Buy (Global – Manufacturer in India) in Defence Acquisition Procedure (DAP) 2020 invite foreign OEMs to participate in the opportunities offered by the Indian Defence industry. “Foreign OEMs can set up manufacturing facilities individually or partner with Indian companies through a joint venture or technology agreement to capitalise on the ‘Make in India’ opportunity,” he said.

Shri Rajnath Singh invited Swedish firms to invest in Defence Corridors in Uttar Pradesh and Tamil Nadu, saying that they can benefit from the unique incentives being offered by the state governments and the availability of a highly skilled workforce in India. Stressing that there is a huge potential for more India-Sweden partnerships, he highlighted the strong capabilities of the Indian defence industry in various fields and their willingness to collaborate with Swedish companies for co-development and co-production in areas of mutual interest.

“Swedish firms already have a major presence in India. There is a lot of scope for Swedish and Indian defence Industries for co-production and co-development. Indian industry can also supply components to Swedish Industries. Technology-centric FDI policy will enable Indian industries to collaborate with Swedish companies in the field of niche and proven military technologies,” stated Shri Rajnath Singh.

The Raksha Mantri said India has a vast Defence Industrial Base with 41 Ordnance factories, nine Defence Public Sector Undertakings and expanding private sector Industries supported by an ecosystem of over 12,000 Micro, Small and Medium Enterprises, adding that Indian Defence Industries possess expertise on a wide range of high-tech defence systems for air, land, sea and space applications. “India has a robust shipbuilding industry. The ships constructed by Indian shipyards are of global standards and extremely cost effective. India and Sweden can collaborate in the shipbuilding industry for mutual benefit,” he said. Shri Rajnath Singh lauded the continuous efforts of SIDM, Confederation of Indian Industry (CII) and SOFF to strengthen the industrial cooperation between the two countries.

On the occasion, an MoU was signed between SIDM and SOFF to promote bilateral defence industrial relations wherein a dedicated Joint Working Group will be formed to take forward mutual objectives.

Shri Rajnath Singh also released the first edition of the ‘SIDM Members Directory 2020-21’ – A 360º Overview of the Indian Defence and Aerospace Sector’. The Directory captures the capabilities of 437 companies in the Defence and Aerospace sector, facilitates ease of access to information on the Indian Industry and serves as a one-stop reference for the global defence community. The Directory also contains the latest 108 items 2nd Positive Indigenisation List.