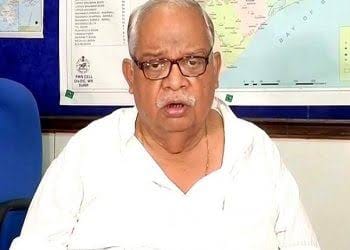 Routray was undergoing treatment at the private hospital for post-Covid complications. He breathed his last at 5:30 PM.

He was first elected to the Odisha Legislative Assembly in 1990. He was elected from Basudevpur constituency on a Janata Dal ticket.

Routray was also a Minister of Forest and Environment in the fourth term of Naveen Patnaik government.

After completing MA (Geography), Routray joined academics as a Lecturer at Ravenshaw College. However, he resigned from the job and joined active politics in 1980.

He quit active politics in 2019 and vacated the seat in favour of his son Bishnubrata.

The late leader’s son was elected to the State Assembly in the last general elections.

The sexagenarian leader is the son of late Odisha chief minister Nilamani Routray. The departed leader happens to be the maternal uncle of hotelier-turned-politician Dilip Ray.

People from all walks of life expressed shock and grief over the demise of Former Minister Bijayshree Routray today afternoon. Political fraternity in the State mourned the death of Routray.Chief Minister Naveen Patnaik said, “I am deeply saddened with the demise of Senior BJD leader and Former Minister Bijayshree Routray. His demise is an irreparable loss for the party. He will be remembered forever as a people’s representative for his people-oriented works. I pray for eternal peace of the departed soul and express sympathy towards the bereaved family.”

Union Minister Dharmendra Pradhan expressed grief and stated, “Routray’s contribution towards the politics will be remembered always. I pray to God for the peace of the departed soul and convey heartfelt condolences to the bereaved family members.”

Former Union Minister and Hotelier Dilip Ray in a social media post stated he has been deeply disturbed by the demise of Bijayshree Routray, his maternal uncle.