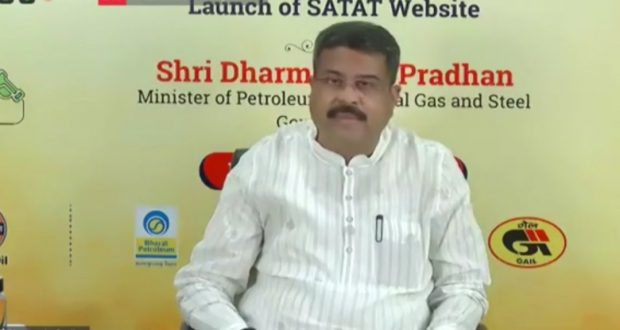 Newdelhi;1/6/21:Union Minister of Petroleum and Natural Gas & Steel Shri Dharmendra Pradhan today presided over a virtual ceremony in which a number of initiatives were launched to provide major fillip to the SATAT initiative, and help India leap ahead towards a greener tomorrow.

This included signing of a Cooperation Agreement by Oil and Gas majors including IndianOil, HPCL, BPCL, GAIL and IGL, for the promotion and development of the SATAT (Sustainable Alternative Towards Affordable Transportation) scheme. The SATAT scheme aims to set up Compressed Bio-Gas production plants and make CBG available in the market for use as a green fuel.’SATAT’, launched on 1.10.2018, envisages to target production of 15 MMT of CBG from 5000 plants by 2023.Besides the potential to boost availability of more affordable transport fuels, better use of agricultural residue, cattle dung and municipal solid waste, the 5000 CBG plants will provide an investment of 1.75 lakh crore, an additional revenue source to farmers, and 75,000 direct job opportunities and lakhs of indirect jobs. 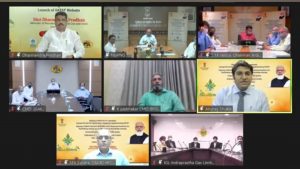 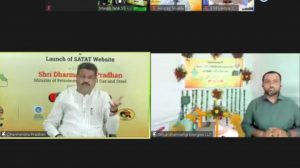 During the landmark event, Union Petroleum Minister also inaugurated the first injection of CBG into the CGD pipeline network at Govardhannathji Energies into Gujarat Gas CGD network at NadiadKhedaDistt., Gujarat. This is in line with the recently issued policy guidelines by the Ministry of Petroleum & Natural Gas on CBG injection in the CGD network.

A website to provide a digital boost to the SATAT programme was also unveiled during the event. The website www.satat.co.in shall be a resource centre for new and existing CBG Plants providing details on CBG & SATAT, enablers under the SATAT scheme and FAQs. The portal also contains a section on the learning modules where handy presentations and videos have been made accessible.

Speaking on occasion, Secretary Petroleum Shri TarunKapoor said that the agreement among Govt PSUs will inspire confidence among the entrepreneurs putting up CBG plants, and remove doubts about the marketing responsibility of gas from these plants. He said that injection of CBG into the CGD pipeline network is an important milestone. He said that the Government is in discussion with the state governments to sort out various issues concerning these plants, and also with the Fertilizer department for the marketing of manure produced in these plants. Shri Kapoor called for quick installation of SATAT plants.

2021-06-01
Editor in chief
Previous: Odisha Government departments will function with 30 percent strength of employees for the extended COVID-19 lockdown
Next: Decision on Class 12 CBSE Exams has been taken in the interest of students: PM