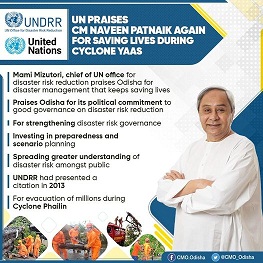 Bhubaneswar: 30/5/21; Naveen Patnaik-led government in Odisha is winning praise from several quarters, including the United Nations (UN) and national media for its disaster management.

According to a report of the Times of India, the UN has praised the Chief Minister for his well-resourced disaster management authority that saves live during natural calamities.

“The Odisha CM has provided political commitment necessary to build a robust and well-resourced disaster management authority. In 1999, some 10,000 people died on Odisha coastline and that has never been repeated, Mizutori told the Times of India