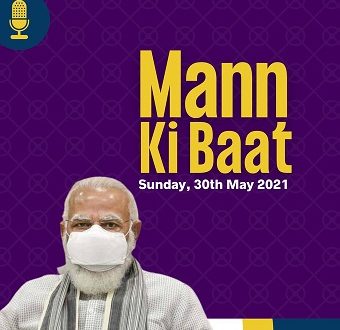 in National May 30, 2021 Comments Off on PM Modi shares his thoughts in Mann Ki Baat; Expresses gratitude to Corona warriors 193 Views

Newdelhi:30/5/21;Prime Minister Narendra Modi has expressed gratitude to Corona warriors who played a major role in the fight against the second wave of COVID. He said delivering medical oxygen to remote parts of the country was indeed a huge task. Addressing the nation in his Mann Ki Baat programme in All India Radio, the Prime Minister said people have witnessed how India’s doctors, nurses and frontline warriors have toiled day and night without bothering about themselves to tackle the second wave.

He said the nation’s resolve has always been stronger than any challenge it may face. Mr Modi said in the midst of this pandemic, India is moving forward with the resolve of ‘service and cooperation’. He urged everyone to follow social distancing, and wear masks and get themselves vaccinated. The Prime Minister said demand for oxygen surged all of a sudden when the second wave came. Many plants manufacturing industrial oxygen are located in the eastern parts of the county.

He said cryogenic tanker drivers, Oxygen Express and Air Force pilots  worked on a war footing to save the lives of hundreds of thousands of people. Mr Modi spoke to Dinesh Upadhyay from Jaunpur of Uttar Pradesh who recounted his experience driving a tanker for liquid oxygen. The Prime Minister said a tanker driver comes across as a godsent messenger when he reaches a hospital with oxygen.

He lauded the Indian railways for facilitating transport of oxygen. Oxygen Express have transported large quantities of oxygen to all corners of the country, faster than oxygen tankers travelling by road. He said it is a matter of pride that one oxygen express is being fully run by women. He spoke to Shirisha Gajni, a loco pilot of Oxygen Express. Mr Modi also highlighted the important role being played by the Navy , Air Force, Army and institutions like DRDO. He said countrymen are keen to understand how they are facilitating the transport of oxygen. He spoke to Group Captain Patnaik from the Air Force on this issue.

The Prime Minister saluted the soldiers and corona warriors for their immense contribution. He said this type of disaster has hit the world in a hundred years and therefore no one had any prior experience in dealing with the calamity. He said India used to produce 900 Metric Tonnes of liquid medical oxygen in a day. Now, it has expanded to generating more than 10 times the normal output and producing around 9500 Metric Tonnes per day. Mr Modi said that at the beginning of the pandemic, there was only one testing lab in the country, but today more than two thousand five hundred labs are in operation.

Initially, only a few hundred tests could be conducted in a day. Now, more than 20 lakh tests are being carried out in a single day. So far, more than 33 crore samples have been tested in the country. The Prime Minister said there are countless frontline workers engaged in the work of sample collection, going amidst infected patients, and taking their sample. He called it an example of yeoman service. He spoke to a lab technician in Delhi, Prakash Kandpal, who detailed his experience so far.

The Prime Minister said that even in this pandemic, country’s farmers have achieved record production of food grains. He said that this time, farmers have got more than the minimum support price for mustard in many places. He stated that 800 million underprivileged people are being provided free ration in this hour of crisis due to robust production of foodgrains. He added that  farmers are doing wonders in many areas by taking advantage of the new provisions brought by the government.

Mr Modi gave the example of farmers of Agartala who produced a very good jackfruit harvest. Anticipating demand in the country and abroad, the jackfruit produce was brought to Guwahati by rail. These jackfruits are now being sent to London from Guwahati. He also cited the example of Shahi Litchi of Bihar. In 2018, the Government gave GI Tag to Shahi Litchi so that its identity would be reinforced and the farmers would get more benefits. This year, the Shahi Litchi of Bihar was sent to London by air.

The Prime Minister said that from East to West, North to South, India is full of such unique flavors and products. He told how the mangoes of Vizianagaram in South India are being ferried by Kisan Rail to Delhi. The Kisan Rail has so far transported nearly 2 lakh tonnes of produce. He said farmers are now able to send fruits, vegetables, and grains to other remote parts of the country at a very low cost. The Prime Minister said recently, India confronted natural disasters with fortitude. In the past ten days, the country faced two major cyclones – cyclone Taukte on the west coast and cyclone Yaas on the east coast. Both these cyclones affected a number of States.

He commended people of all these cyclone affected States for displaying courage, patience and discipline. He added that people who led rescue and relief work deserve more appreciation than can be expressed. Today also marks the completion of 7 years of the Narendra Modi government.

The Prime Minister said over these years, the country has followed the mantra of ‘Sabka-Saath, Sabka-Vikas, Sabka-Vishwas’. He said that now, India moves ahead with her own conviction and is not pressured by other countries.  He stated that confidence of people soars now that India gives a befitting reply to those who conspire against her. The Prime Minister thanked the citizens for writing letters to him, especially people from far corners of the country who tell him that they received electricity, tap water,  roads and houses due to his government’s schemes.