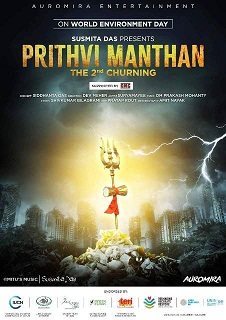 Siddhanta Das, former Director-General of Forest, Government of India, and husband of singer Sushmita Das has written the concept note based on which Shiv Kumar Bilagrami penned the lyrics. Om Prakash Mohanty has composed the music.  This music video directed by Dev Meher featuring Suryamayee.

Director of the music video Dev Meher said that “Apart from being the only song from India to be backed by the UN body for 2021, this music video has several firsts. For the first time in India, a music video on pollution has been built at this scale combining CGI, Choreography, Performance, and Art.  Similarly, for the first time, a concept on the environment has been musically fused into Shiva Tandava Stotram. “

Singer Susmita Das said that,  “I like to produce songs on contemporary social issues to sensitize public sentiment as I believe music is the most powerful medium to reach out to the masses. My earlier song “Ayigri Nandini…” based on Durga Strotram, on the theme of women’s empowerment, was highly appreciated by music lovers.”

On this occasion, Siddhanta Das said that “I very sincerely wish the song to circulate far and wide. It is not for entertainment, but for spreading an important message for creating mass awareness. Therefore, I seek the support of Environmentalists and celebrities in different fields who are passionate about conservation of Environment to promote the song.”

United Nations Environment Programme (UNEP), International Union for Conservation of Nature (IUCN), Bombay Natural History Society (BNHS), The Energy and Resources Institute (TERI),  Wildlife Trust of India (WTI), and Jungle Lodges and Resorts (JLR) a Govt of Karnataka undertaking have given consent to use their logo in the video film as a token of endorsement.  Odisha Mining Corporation Ltd also has given support for the project.