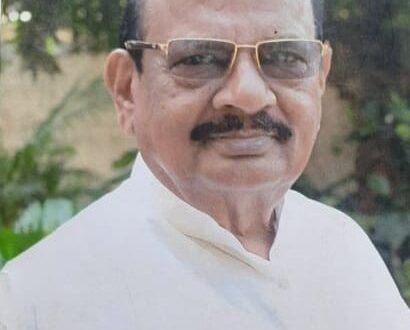 in State News May 29, 2021 Comments Off on Veteran journalist Basant Das is no more 237 Views

Bhubaneswar:29/5/21: Veteran journalist Basant Das is no more. He lost his battle to COVID-19 today.The veteran journalist and author succumbed to Covid-19 on Friday.  He was 81. Das had tested positive for the virus and was admitted to a private Covid hospital in Bhubaneswar. However, he breathed his last while undergoing at the private hospital late on Friday night

Known for his recent book titled ‘Political History of Modern Odisha’, Das was the author of 16 books to his credit. He was conferred with the prestigious Odisha Sahitya Academy Award for his book ‘Je Desh Jai, Se Fala Khai’. He had received acclamation from many organisations for the award-winning book.

Chief Minister Naveen Patnaik expressed his deep grief over the departure of the journalist and author Basant Das.“Das was well-known as a columnist and political analyst. He had been active in the journalism for more than half a century. He will be remembered for his contribution to the field of literature and journalism,” the CM said.

Basant Das, a multifaceted personality, had opted for journalism refusing a lucrative government job after completing his post-graduation in Political Science from Utkal University. He began his career in journalism as a correspondent of Eastern Times, Odisha’s only English Daily in 1965.

He retired as the Chief of Bureau of the Amrita Bazar Patrika group of publications for Odisha in the year 1996.

The well-known political pundit had observed the politics of Odisha during last five decades.

Following his retirement, the veteran journalist and litterateur continued writing the books. He was associated with a large number of social organisations including Odisha Media Academy.

A pall of gloom descended among the media fraternity due to his sudden demise of the veteran journalist.

2021-05-29
Editor in chief
Previous: Centre invites applications for citizenship from Hindus, Sikhs, Jains, Buddhists, Parsis and Christians from Afghanistan, Pakistan and Bangladesh who have taken shelter in India
Next: Online classes of college and university students in the state will resume from June 1