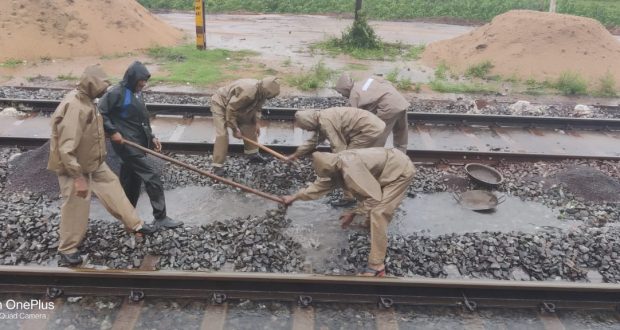 in District Diary, State News May 26, 2021 Comments Off on Railways has decided to resume some of the Special Train services which were cancelled in view of cyclone Yaas 202 Views

Bhubaneswar: 26/5/21: Railways has decided to resume some of the Special Train services which were cancelled in view of cyclone Yaas.

Due to improvement in a situation caused by the cyclone and after reviewing the feasibility and safety of train operations, Railways has decided to run goods trains from today evening and passenger trains will be resumed from tomorrow on the normal route which was earlier declared as cancelled due to cyclone.

Railways had cancelled about 124 trains that were originating, terminating and passing through East Coast Railway jurisdiction especially in Kharagpur-Visakhapatnam Railway Section.

Cyclone situation has been reviewed and a decision has been taken as per ground circumstances. Railway teams including track and bridge engineers, overhead electricity engineers, had gone to do a detailed study of the impact of cyclone Yaas between Bhubaneswar and Kharagpur.