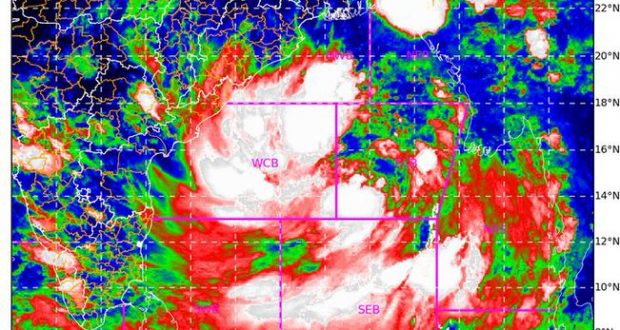 in Environment, National May 23, 2021 Comments Off on Depression very likely to move north-north-westwards and intensify into a Cyclonic Storm by 24th May morning 408 Views

Newdelhi:23/5/21:  Latest satellite imageries and Ocean Buoy observations indicate that yesterday’s low-pressure area which became well marked over the east-central Bay of Bengal in the same evening has concentrated into a depression over the east-central Bay of Bengal and lay centered at 1130 hrs IST of today, the 23rd May 2021 near latitude 16.1°N and longitude 90.2°E, about 560 km north-northwest of Port Blair (Andaman Islands), 590 km east-southeast of Paradip (Odisha), 690 km south-southeast of Balasore (Odisha) and 670 km south-southeast of Digha (West Bengal).

It is very likely to move north-north-westwards and intensify into a Cyclonic Storm by 24th May morning and further into a Very Severe Cyclonic Storm during the subsequent 24 hours. It would continue to move north-north-westwards, intensify further and reach Northwest Bay of Bengal near West Bengal and north Odisha coasts by 26th May morning. It is very likely to cross north Odisha – West Bengal between Paradip and Sagar islands by the evening of 26th May as a Very Severe Cyclonic Storm.

Forecast track and intensity are given in the following table:

The intensification &likely movement of the system is under continuous surveillance and the concerned state governments are being informed regularly.