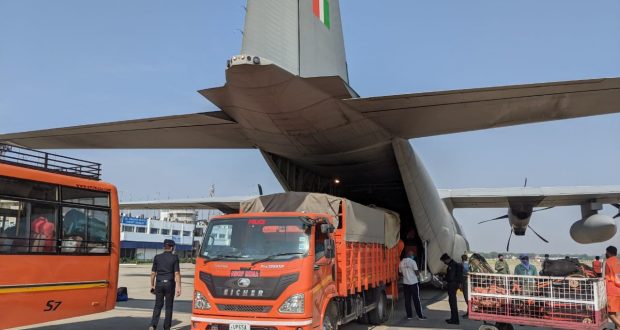 in National May 23, 2021 Comments Off on Armed Forces prepare to mitigate Cyclone YAAS 212 Views

Newdelhi:23/5/21:Armed Forces have commenced preparations to mitigate the impact of Cyclone YAAS, which is expected to hit the Eastern Coast on May 26, 2021. Indian Air Force (IAF) has airlifted 950 National Disaster Response Force (NDRF) personnel and 70 tonnes of load from Jamnagar, Varanasi, Patna and Arakonnam to Kolkata, Bhubaneswar and Port Blair in 15 Transport Aircraft, as on May 23, 2021. Sixteen transport aircraft and 26 helicopters are on standby for immediate deployment. Indian Navy, fresh from Humanitarian Assistance and Disaster Relief (HADR) and rescue operations on the Western Coast, has moved 10 HADR pallets to Bhubaneswar and Kolkata, while five HADR pallets are ready at Port Blair. Eight ships of Eastern Naval Command and Andaman and Nicobar Command have been embarked with HADR Bricks to provide succour to the people likely to be impacted. Four diving and 10 flood relief columns have been pre-positioned at Kolkata, Bhubaneswar and Chilika for rendering assistance to civil administration at short notice.

Seven flood relief teams and two diving teams are ready at different locations in Andaman and Nicobar Islands to deal with any eventuality. In addition, Naval Aircraft and helicopters in Vishakhapatnam and Port Blair are on operational readiness to undertake search and rescue missions. Eight flood relief columns and three Engineer Task Forces of the Indian Army are ready for immediate deployment on requisition by the civil administration. The Armed Forces are in constant touch with the civil administration of the affected states. Armed Forces teams are aware of the need to keep the road & rail links open to ensure uninterrupted supply of life saving oxygen & drugs required for treatment at COVID-19 hospitals. The Armed Forces remain ready to mitigate the impact of the impending cyclone, save lives and provide succour to the fellow citizens.

2021-05-23
Editor in chief
Previous: More than 21.80 crore vaccine doses provided to States/UTs
Next: Depression very likely to move north-north-westwards and intensify into a Cyclonic Storm by 24th May morning