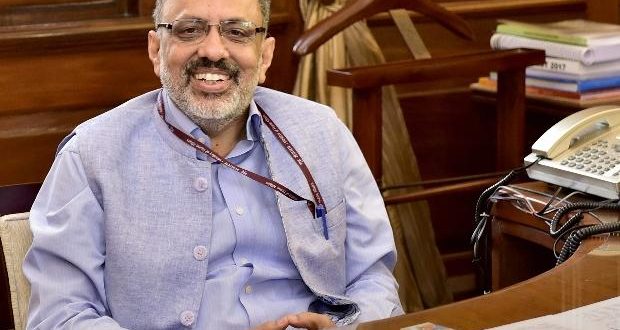 Cabinet Secretary Reviews the COVID situation in the Country

in National May 11, 2021 Comments Off on Cabinet Secretary Reviews the COVID situation in the Country 240 Views

Newdelhi:11/5/21:The Cabinet Secretary chaired the 33rd meeting with the States and UTs to review the COVID situation in the country. The meeting was attended by Chief Secretaries and Health Secretaries of all States/UTs.

Shri Rajiv Gauba, Cabinet Secretary briefed the States on the action taken by the Government of India in controlling the effect of the COVID pandemic since last year and shared with them the work done by the Task Force and Expert Groups constituted by the Government of India on crucial matters like improvement and augmentation of health infrastructure, research & production of vaccines, welfare of poor people, vaccination and supply of oxygen. Shri Gauba also appreciated the real-time work done by the States/UTs to augment health infrastructure and informed them about the various advisories issued by Ministry of Health & Family Welfare and other Ministries of Government of India on home isolation, care of mild COVID cases, etc. He informed that the Prime Minister’s active engagement with domestic industries for production and supply of LMO since September, 2020 has helped in resolving various logistics issues of transport of LMO on land, air and water.

Cabinet Secretary emphasised the need of keeping the public informed about the action taken by the Central and State governments and assured that no stone would be left unturned to provide timely oxygen supply and other medical resources to the hospitals.

The Cabinet Secretary, Shri Rajiv Gauba informed that Prime Minister had constituted a Group of Experts for development and production of vaccines in the country in April, 2020 and another Group of Experts later in August, 2020 for distribution of vaccines. The priority groups were identified on the advice of experts and vaccination for these priority groups were supplied to the States by the Government of India free of cost. Thereafter, as per demand, other vulnerable groups were also included in the priority list. He insisted that those eligible for second dose of vaccination should be given priority and that vaccination wastage should be minimized. Expressing his concern over the misinformation on the subject of vaccination, he mentioned that all vaccines that are procured either by the Central Government or the State Governments, are actually meant for the public in the States and there is no consumption at the Central level.

The Health Secretary requested the States/UTs to prioritise in terms of testing, intensive action and local containment of the pandemic, strengthening of hospital infrastructure, augmentation of human resources, rational utilisation of oxygen, etc. He informed about the plan to instal 1213 PSA plants within the next three months. Reiterating the judicious use of vaccines, he stressed upon the need for an awareness campaign on the importance of completion of both doses of vaccination, for better immunity.

States should constitute dedicated teams to interact with the vaccine producers on daily basis.

Secretary, Information & Broadcasting emphasised the importance of continuation of COVID appropriate behavior, and generating awareness about the various guidelines and advisories issued by the Government of India, which are also available on https://www.mygov.in/covid-19/

He requested the States to spread further awareness in the peri-urban, rural areas and tribal areas by involving the field- level functionaries like anganwadi workers, ASHA workers, ANMs, and others. He also requested them to involve community leaders and local influencers to take across the appropriate guidelines before the people, so that there is no panic regarding the initial symptoms of COVID and the care required thereafter.