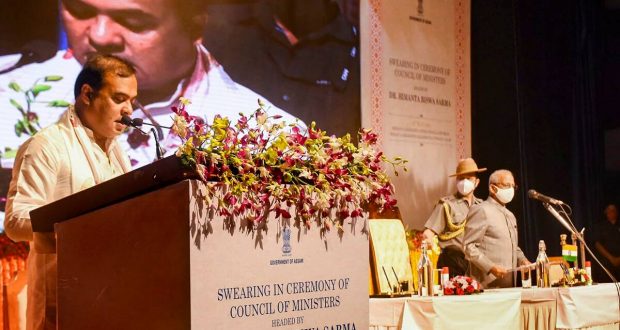 in National May 10, 2021 Comments Off on Himanta Biswa Sarma sworn in as as the new Chief Minister of Assam 164 Views

Mr. Sarma who is representing Jalukbari assembly constituency joined the BJP in 2015. Prior to joining the BJP, he held several important portfolios in the Tarun Gogoi-led Congress government. A writer and sports administrator, Shri Sarma is also holding the post of Convenor of the North East Democratic Alliance, NEDA.

Prime Minister Narendra Modi has congratulated Assam’s new Chief Minister Himanta Biswa Sarma and the other Ministers who took oath today. Mr. Modi expressed confidence that this team will add momentum to the development journey of Assam and fulfill the aspirations of the people.

He said former Chief Minister Sarbananda Sonowal’s contribution towards Assam’s progress and strengthening the BJP in the state is immense. The Prime Minister said Mr. Sonowal was at the helm of a pro-people and pro-development administration over the last five years.