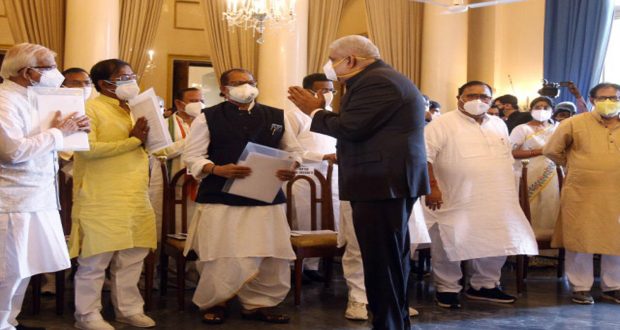 in National May 10, 2021 Comments Off on 43 TMC leaders sworn-in as ministers in Mamata Banerjee’s new cabinet 175 Views

Kolkota:10/5/21; In West Bengal, 43 ministers were sworn in at a simple ceremony held at Raj Bhavan in Kolkata this morning. Governor Jagdeep Dhankhar administered them the oath of office and secrecy. Out of a total of 44 ministers of the state, there are 9 women members including the CM. After the oath-taking ceremony, ministers went to the state secretariat for the first cabinet meeting.

AIR correspondent reports, in her third term, Chief Minister Mamata Banerjee inducted 43 members in her council of ministers. 24 are included in the cabinet while 10 are made ministers of state with independent charges. 17 new faces including 9 ministers of states have got ministerial berths for the first time.

First-time MLAs like former cricketer Manoj Tiwari and Actress of Santhali language films Birbaha Hansda have been made MoS while retired IPS Humayun Kabir, another first time MLA has become minister of state with independent charge. Sashi Panja, MoS of the earlier TMC government has been elevated to cabinet rank.

Three ministers, Amit Mitra, Bratya Basu, and Rathin Ghosh took oath virtually. Interestingly, Amit Mitra, finance minister of the earlier government has not contested this time but was sworn in today as a cabinet minister.

Chief Minister Mamata Banerjee also lost from Nandigram seat which means, two senior ministers of the state cabinet including the CM are to face the poll once more and to be elected in the state assembly within 6 months.

2021-05-10
Editor in chief
Previous: Himanta Biswa Sarma sworn in as as the new Chief Minister of Assam
Next: Odisha government decided to invite global tenders from vaccine manufacturers for procurement of Covid-19