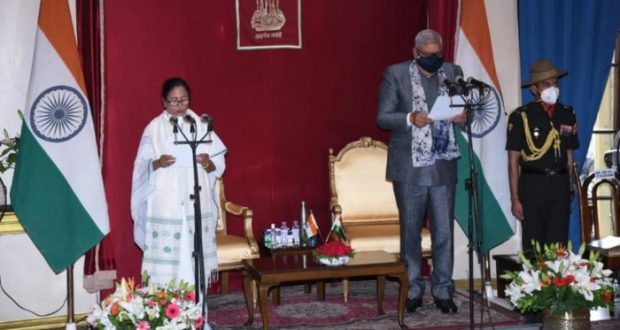 in National May 5, 2021 Comments Off on Mamata Banerjee sworn-in as CM of West Bengal for 3rd consecutive term 293 Views

Kolkota:5/5/21:In West Bengal, TMC chief Mamata Banerjee was sworn-in as the Chief Minister of the state for the third consecutive term today. Governor Jagdeep Dhankhar administered her oath of office and secrecy at a simple ceremony held at the Raj Bhavan in Kolkata. The swearing-in of the newly elected MLAs will be held in the Assembly house in two phases tomorrow and the day after. The oath taking ceremony at the Raj Bhavan was held following COVID protocol. AIR correspondent reports that after securing more than two third majority in the recently concluded assembly elections, Trinamool Congress Supremo Mamata Banerjee took oath as the Chief Minister of West Bengal this morning.

On her third consecutive term as the administrative head, Ms Banerjee ensured to keep the oath taking ceremony held in the Throne Hall of Raj Bhavan unostentatious in view of the pandemic. In her first term in 2011, Mamata walked all the way to the state secretariat ‘Writers’ Building’ after taking oath in Raj Bhavan while in 2016, thousands of people congregated at Red Road to witness the grandiose ceremony held for the first time outside Raj Bhavan premises. However, due to the Covid situation, only selected dignitaries were present today to witness the historic event.  Later, CM Banerjee was given guard of honour as she reached the state secretariat Nabanna and held a review meeting on the Covid situation of the state.

2021-05-05
Editor in chief
Previous: Odisha has so far sent 281 tankers/containers carrying 5,125.412 MT medical oxygen to 10 states
Next: ECI decides to defer bye-elections of Parliamentary and Assembly Constituencies in various States/UT