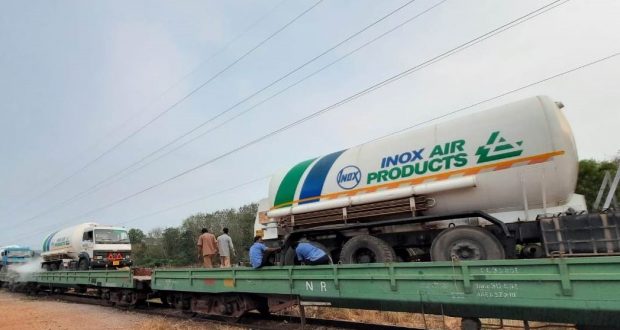 in National April 30, 2021 Comments Off on Oxygen Express Operations of Indian Railways continue to bring relief to the States 235 Views

Newdelhi:30/4/21:Indian Railways is continuing its Oxygen Express journey and saving many more lives. Railways are in full preparedness to run even more Oxygen Express based on the requests from State Governments.

Madhya Pradesh will receive its second Oxygen Express carrying 47.37 MT LMO from Bokaro to Sagar and Jabalpur in four tankers. The train started from Bokaro on 29 April 2021 and is currently moving uninterrupted towards its destination. The train is expected to reach its destination by today evening

Haryana will receive its first and second Oxygen Express soon. Two trains, one from Rourkela to Haryana carrying 47.11 metric tonnes LMO in 3 tankers and another one from Angul to Haryana carrying 32 Metric tonnes in 2 tankers are on their way to their destination. These trains will deliver much-needed oxygen supply to the residents of Haryana in a safe and timely manner.

Uttar Pradesh is continuously replenishing its Oxygen supply with Oxygen Express. UP will receive its 7th Oxygen Express, which is expected to start shortly from Bokaro carrying three tankers of Liquid Medical Oxygen (LMO). In order to further boost up the oxygen supply, UP Govt. has also requested to transport 10 ft ISO containers loaded with Liquid Oxygen from Jamshedpur to Lucknow. Additional planning is required to transport ISO containers and Railways Officials are currently working on the best possible options to move ISO containers safely and securely. It is expected that ISO containers carrying liquid medical oxygen will start loading on 01 May 2021 at Jamshedpur.

2021-04-30
Editor in chief
Previous: Expert panel of doctors answer queries in Webinar on ‘COVID-19: Myths Vs Reality’
Next: No shortage of Oxygen for the treatment of Covid-19 patients in Odisha