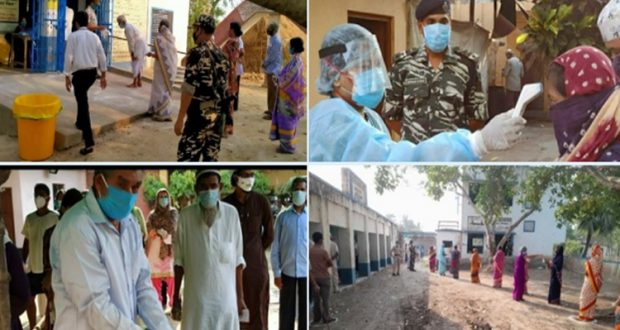 in National April 29, 2021 Comments Off on Polling underway for 8th and last phase of Assembly elections in West Bengal 219 Views

Newdelhi:29/4/21:In the poll-bound West Bengal, polling for the Eighth and Final Phase of Assembly Elections is progressing smoothly. The average voter turnout was registered at 37.80 per cent till 11.30 A.M. The people were seen standing in long queues in front of the Polling Stations right from the beginning. The polling, which began at 7.00 A.M., will be conducted till 6.30 P.M. in 35 Assembly Constituencies spread over four districts going to polls today. Along with this, a re-poll is also being held at Polling Station No. 126 of Sitalkuchi Assembly seat in Cooch Behar district. The Election Commission has deployed 641 companies of the Central Armed Police Forces to ensure free and fair polling. The polling process is already over in respect of 257 out of the total 294 Assembly seats in the earlier seven phases. The counting of votes will be taken up together on 2nd of May.

All the necessary facilities and security arrangements have been made to ensure free and fair polling during this phase. The Voter Verifiable Paper Audit Trail (VVPAT) is being used along with Electronic Voting Machine (EVM) at every Polling Station, with a view to enhance the transparency and credibility of the election process and the availability of adequate number of EVMs and VVPATs has already been ensured for the smooth conduct of elections.

In view of the prevailing COVID-19 pandemic, the option of Postal Ballot facility has been extended to the electors who are COVID- 19 positive or suspect as certified by competent authority and are in home or institutional quarantine along with those marked as Persons with Disabilities (PwD) and above the age of 80 years. It has also been ensured that every Polling Station is equipped with Assured Minimum Facilities (AMF) like drinking water, waiting shed, toilet with water facility, adequate arrangements for lighting, ramp of appropriate gradient for the  Persons with Disabilities. The special facilities include mandatory sanitization of Polling Station, thermal checking of voters at entry point either by polling staff or paramedical staff or an Asha worker. If the temperature is above the set norms of Health Ministry, then the elector will be provided with token and asked to come for voting at the last hour of poll. At the last hour of poll, such electors will be facilitated for voting, strictly following COVID-19 related preventive measures.

During the Eighth Phase, total 283 candidates including 35 women are vying for the 35 Assembly seats spread over four districts of West Bengal going to polls today. Over 84.77 lakh voters including 41.21 lakh women and 158 Third Gender persons will decide the fate of these candidates. Total 11,860 Polling Stations have been set up for this purpose. Ruling AITC and Bharatiya Janata Party are contesting for all the 35 seats. Congress, the Left parties and their alliance partner Indian Secular Front are fighting under the banner of Sanyukta Morcha. Bahujan Samaj Party has fielded 24 candidates, Congress has 19, CPI (M) – 10, ISF – four, AIFB – three and RSP – one while there are 87 independents along with 65 others also in the fray.

Meanwhile, the Election Commission issued fresh poll notifications in respect of Samserganj and Jangipur Assembly Constituencies in West Bengal where the poll process was adjourned due to death of the concerned candidates. The polling in these two constituencies will now be held on 16th of May and the whole process of elections will be completed by 21st of May. Similarly, in case of Assembly By-poll to Pipili seat in Odisha, the polling will be held on 16th of May and the counting of votes will be taken up on 19th of May.

2021-04-29
Editor in chief
Previous: Government of Odisha approved 9 industrial projects to the tune of Rs 2570.54 crore
Next: 1.33 crore people register themselves for 3rd phase of Covid Vaccination