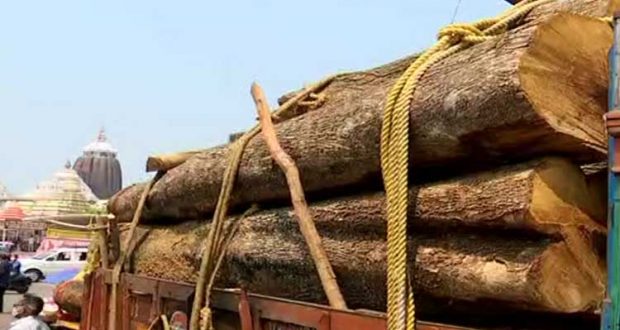 in District Diary April 27, 2021 Comments Off on Rath Yatra 2021 : fourth batch of timber reached the pilgrim town of Puri 387 Views

Puri:27/4/21: With the world-famous Rath Yatra around the corner, the fourth batch of timber reached the pilgrim town of Puri on Tuesday for chariot construction.

According to sources, 45 ‘Asana’ and ‘Dhaura’ wooden logs have arrived at Grand Road from Boudh today. Earlier yesterday, 17 wood logs had reached the town from Nayagarh forest division.

It is pertinent to mention here that, as many as 865 wooden logs are required for the construction of three chariots of the Holy Trinity for their annual sojourn. However, only 796 new logs will be required this year as 69 unused logs of last year will be used this time, sources added.

As per the tradition, the slicing of timbers has already begun at Cuttack on Ram Navmi followed by a special ritual. The chariot work will begin at Puri from Akshay Tritiya following a ritual at Srimandir.

Meanwhile, preparations are in full swing for the Chandan Yatra of the Holy Trinity. Five boats were taken out of the water and will be joined together to make ‘Nanda’ and ‘Bhadra Chapa’.

As per the custom, the famous Chandan Yatra will begin from Akshay Tritiya and will continue for 21 days in which Lord Madan Mohan, Bhudevi, Rama Krushna, and Panchu Pandav will play ‘Chapa’ in order to get relief from the scorching summer heat.

Last year, the yatra was held inside Srimandir premises in view of the Covid-19 pandemic. However, the decision on how the yatra will be held this year has not been taken yet.

“We are gearing up for Chandan Yatra and took out five boats from Narendra Puskarini. These boats will be decorated and used in the yatra,” said Bhoi Sardar Rabi Bhoi.

“Last year’s situation is still afresh in my mind. The yatra and construction of chariots will begin from May 15 on the occasion of Akshay Tritiya. We hope, Lord Jagannath will bless us and all the rituals can be performed as per his wish,” said Bhoi servitor Kartika Bhoi.