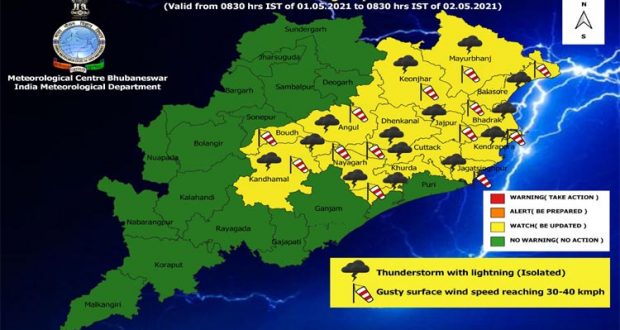 Bhubaneswar27/4/21; Heatwave conditions are likely to prevail at one or two places over the districts of Khordha and Balasore in the next 24 hours, predicted India Meteorological Department (IMD) on Tuesday.

As per IMD, The North-South trough now runs from Sub-Himalayan West Bengal and Sikkim to south coastal Odisha. The cyclonic circulation over Coastal Andhra Pradesh and neighborhood has become less marked.

Apart from this, light to moderate rain or thundershower very likely to occur at one or two places over the districts of Malkangiri, Koraput, Rayagada, Nawarangpur, Gajapati, Kandhamal, Keonjhar, Mayurbhanj, Balasore, Nayagarh and Kalahandi in the next 24 hours.