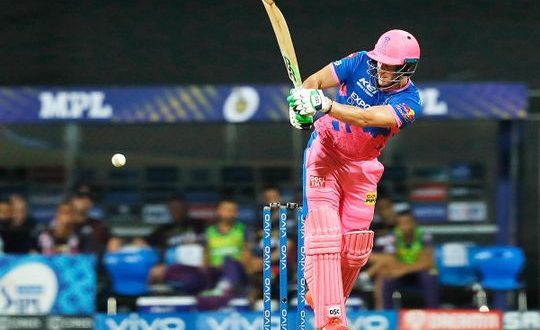 Mumbai:25/4/21:In IPL Cricket, Rajasthan Royals (RR) defeated Kolkata Knight Riders (KKR) by six wickets in Mumbai last night. Chasing a target of 134 runs, Rajasthan Royals reached 134 for four in 18.5 overs. The RR skipper remained unbeaten at 42 off 41 deliveries and helped steer his side to a win. Shivam Dube also made a noteworthy contribution with 22 runs off 18 balls. David Miller (24) remained unbeaten and helped form a match-winning partnership with Samson.

Varun Chakravarthy was once again KKR’s main bowler with two wickets. Meanwhile, Shivam Mavi and Prasidh Krishna registered a dismissal each. Earlier, Rajasthan Royals won the toss and invited Kolkata Knight Riders to bat first. KKR wrapped up their innings at 133 for nine in 20 overs with the help of Rahul Tripathi’s 36 off 26 balls and Dinesh Karthik 25 off 27. For Rajasthan Royals, Chris Morris took four-wicket while Jaydev Unadkat, Chetan Sakariya, and Mustafizur Rahman took 1 wicket each.

Chris Morris was declared Player of the Match. Today, there will be two matches. In the first match Chennai Super Kings will be up against Royal Challengers Bangalore in Mumbai at 3.30 pm. The second match will be played between Sunrisers Hyderabad and Delhi Capitals in Chennai at 7.30 pm

2021-04-25
Editor in chief
Previous: Indian, French Navy bilateral exercise VARUNA-2021
Next: Centre has advised States to set up more private centres before vaccination of all above 18 years begins