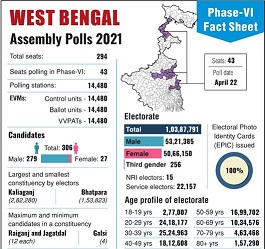 Westbengal:22/4/21:Polling was today conducted peacefully in14,480Polling Stations spread across 43 Assembly Constituencies, in the sixth phase of elections in the State of West Bengal. Voters set an example of Covid appropriate behaviour following due protocols of sanitization and social distancing. Voter Turnout of 79.09% was reported by 5 PM for Phase VI of elections today.

Further to instructions issued on 16th April 2021, ECI has again invited the attention of all National, State Political parties to abide by the laid down covid protocols during campaigning. ECI has instructed District authorities to initiate action under Disaster Management Act 2005, Epidemic Diseases Act 1897, etc. in case of any violations and to cancel permission for further campaigns even if granted earlier.

During the ongoing elections till this phase in West Bengal, a record seizure of Rs.316.47  Crores has already been reported till date.

Details of Electors, Polling Stations & Observers in the poll are as follows:

2021-04-22
Editor in chief
Previous: State Governments are free to procure COVID vaccine doses from the vaccine manufacturers
Next: An Optimised Oxygen Administering Device amidst the Nationwide Oxygen Shortage