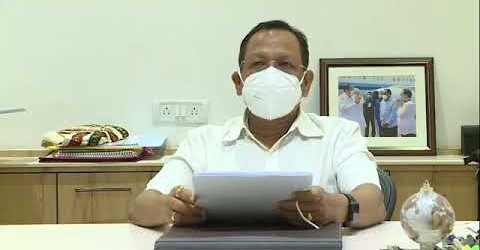 Bhubaneswar:19/4/21: In view of the unprecedented spike in Covid-19 cases in Odisha, the State government on Monday announced a weekend shutdown at all the urban areas across the State, beginning on April 24.

However, all the essential services including hospitals, nursing homes, medicine stores will continue functioning as usual during the shutdown. The health workers will also be allowed to travel to hospitals and health care centers without any hindrance, Special relief Commissioner (SRC) Pradeep Kumar Jena said.

“All dhabas, hotels on national and state highways will remain open but partaking of food will not be allowed during the weekend shutdown,” said Jena.

According to the new Covid-19 guidelines issued by the State government, marriage and funeral organisers will have to mandatorily submit the list of participants in the functions to local authorities for necessary permission 24 hours before the events. The present cap of 50 attendees at weddings will continue.

During the weekend shutdown all activities shall be closed except the following:

No pass would be required for the movement of the above category of persons. Valid travel documents/ authorisations such as airline/ railway/ bus tickets/ boarding passes, with any identity proof shall be adequate for the purpose. Identity cards issued by appropriate authorities of the establishments shall serve as a pass for effecting the movement of employees of establishments under permitted activities. Patients and their attendants/ persons requiring the emergency need for movement shall be allowed to move with minimal proof of their emergencies. Officers/ staff on duty shall be sensitised to appreciate the situation of persons on the road and take suitable action to facilitate movement on emergency needs.

2021-04-19
Editor in chief
Previous: PM interacts with leaders of pharma industry
Next: Covid-19 cases in Odisha registered a big jump with total of 4,445 persons tested positive on Monday