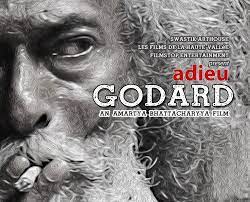 Bhubaneswar:17/4/21: 43rd Moscow International Film Festival which is going to be commenced from April 22 to 29,2021 Odia feature film Adieu GODARD, written and directed by Amartya Bhattacharyya and produced under the banner of  Swastik Arthouse is inducted in OUT OF COMPETITION PROGRAMS(Film around the world section)the film revolves around A small Indian village: an old man is addicted to watching pornography with his friends. One fine day, he accidentally brings home a DVD with a Godard film inside it. Though his friends were disgusted, Ananda gets attracted to Godard’s film and gradually develops an obsession. He initiates the idea of hosting a film festival in their village where Godard’s films will be screened. The festival gets organized after a lot of drama, but what happens next is to be seen.

The film is an INDIA, FRANCE co-production and has Choudhury Bikash Das as the central character around whom the film revolves. Shot exquisitely in Odisha, the film is a socio-cultural comic tribute to the legendary French filmmaker Jean-Luc Godard and draws inspiration from his abruptness and quirky style of cinema. Dipanwit Dashmohapatra, Sudharsri Madhusmita, Swastik Choudhury, Choudhury Jayaprakash Das, Shankar Basu Mallick, and Abhishek Giri play other important characters of the film.

Sharing his thoughts, director Amartya Bhattacharyya, also the cinematographer and editor of the film, said – “In a lot of ways, ‘Adieu GODARD’ has been the most challenging film that I’ve made so far. It is also a very special film because, through this film, I pay a kind of tribute to the French auteur Jean Luc Godard, who happens to be my favorite filmmaker. I am very happy and I feel blessed that we’ve been selected at one of the world’s top film festivals like Moscow. I am very hopeful that this humorous film will be deeply loved”

Producer and actor Swastik Choudhury said – “Am super excited with this selection – MIFF is a festival we all look forward to. And what a roller coaster ride this film has been. Several not-so-favorable things amplified due to the lockdown last year. But nevertheless, we were able to push ourselves and complete this film. It is a fantastic script. Everyone’s effort is there to be seen on the screen and this film will be special for we pay tribute to the great filmmaker – Jean Luc Godard in our sweet way”.

An acclaimed director and actor, Choudhury Bikash Das, expressed his happiness saying – “I am really happy to have worked with such a wonderful team. I feel honored that this film will premiere in Moscow and am hopeful that it will be loved by all.”

2021-04-17
Editor in chief
Previous: Srimandir in Puri will be closed every Saturday-Sunday
Next: Wearing a Face cover/ Mask is compulsory in Railway Premises (including trains)