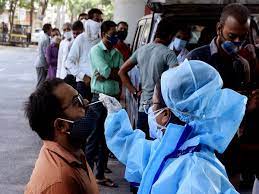 in State News April 17, 2021 Comments Off on Covid-19 cases in Odisha continued to multiply on Saturday with the recording 3144 infections 208 Views

Bhubaneswar:17/4/21: The single-day count of Covid-19 cases in Odisha continued to multiply on Saturday with the State recording 3144 infections and four fatalities in the last 24 hours.

With this, the Coronavirus positive tally in the State surged to 3,64,594 while the death toll rose to 1,942, said a data released by the State Information and Public Relations Department on Saturday.

With today’s inclusion, the active cases in the State stood at 19,077 while 3,43,522 patients have been cured or recovered.

It may be noted that Odisha had last registered over 3000 cases around six months ago on October 8, 2020, when 3144 people had tested positive for the virus with 1825 from quarantine and 1319 local contacts.