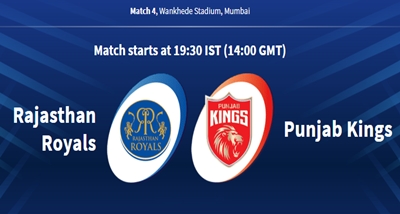 Mumbai: 12/4/21:In the Game Four (4) tonight at Mumbai’s Wankhede Stadium, new captain Sanju Samson proved lucky with the coin for Rajasthan Royals and opted to bowl first like the previous three encounters in the Indian Premier League.

Four new recruits, Mustafizur Rahman, Shivam Dube, Chetan Sakariya and Manan Vohra have been given chances in the Playing XI by a team which can only improve upon their last-place finish in the previous season.

And the man who has a lot of responsibility on his shoulders to lift the morale of Royals, is IPL most expensive player of all time Chris Morris. With English paceman Jofra Archer missing from action at least for the first few games due to his shoulder injury, Morris understands his added responsibility as team’s frontline bowler.

Punjab Kings have three debutants with Shahrukh Khan and Aussies Riley Meredith and Jhye Richardson playing their first match for the franchise.

Skipper KL Rahul, the Orange Cap winner last year, will have plenty to sort out inside the dressing room apart from his own indifferent form with the bat in recent times.

Whether to use explosive Chris Gayle at top of the order or at No. 3 is one big puzzle to solve along with the issue of using top-ranked batsman in T20 Internationals, Dawid Malan, are some of the unsolved puzzles before the team’s think-tank.

2021-04-12
Editor in chief
Previous: US reiterates call for investigation into origins of Covid-19; slams China for not cooperating
Next: Odisha Government approved the establishment of a cancer hospital namely ‘Bagchi-Sri Shankara Cancer Hospital & Research Institute’