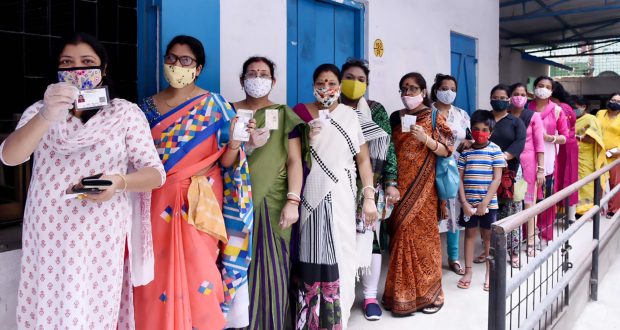 Voters standing in the queue to cast their votes, at a polling booth, during the fourth phase of the West Bengal Assembly Election, in Santoshpur, Kolkata, West Bengal on April 10, 2021.

West Bengal:10/4/21: Election Commission has said that 76.16 percent polling has been recorded till 5 PM in the 4th Phase of Assembly polls held in West Bengal today. The Commission said polling was conducted in 15 thousand 940 Polling Stations spread across 44 Assembly Constituencies today. It said, based on the report received from Special Observers on the reported incident of violence at one Polling Station, No. 126 under Sitalkuchi Assembly Constituency in Cooch Behar, the Poll Body has adjourned the Poll. The Commission said, peaceful and orderly voting took place on 15 thousand 939 booths except for one booth where re-polling has been ordered.

As a major push for conducting free and fair elections, live monitoring and webcasting of more than 50 percent of Polling Stations including critical and vulnerable polling booths were put in place to ensure a safe and secure atmosphere in polling areas.

The Election Commission expressed gratitude to all stakeholders especially the voters for their enthusiastic and fearless participation in the election process today. The Commission particularly thanks Divyangs, senior citizens, service voters for taking part in elections honoring COVID protocol norms.