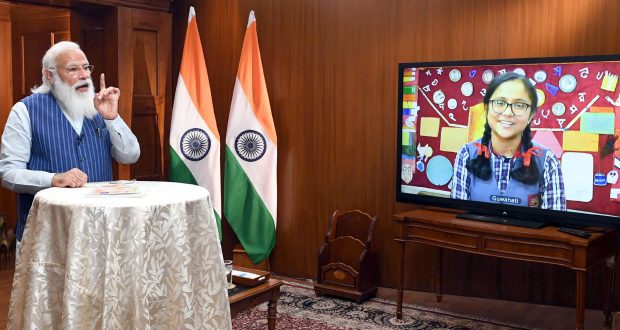 The Prime Minister, Shri Narendra Modi interacting with the students during the Pariksha Pe Charcha 2021, through video conference, in New Delhi on April 07, 2021.

in Education, National April 8, 2021 Comments Off on PM interacts with students, teachers and parents in virtual edition of “Pariksha Pe Charcha 2021” 289 Views

Newdelhi:7/4/21:In the 4th edition of Pariksha Pe Charcha, the Prime Minister, Shri Narendra Modi interacted with students, teachers, and parents in virtual mode today. The interaction, which lasted more than ninety minutes, saw students, teachers, and parents seeking guidance on various issues of importance to them from the Prime Minister. This year too, students from across the country, and also Indian students residing abroad, participated in the event.

Terming this year’s interaction as the first virtual edition of Pariksha Pe Charcha, the Prime Minister said that Corona has led to many innovations and despite the disappointment of not being able to be among the students face to face, there should not be a break in Pariksha Pe Charcha this year. He said that Pariksha Pe Charcha is not only a discussion on examination but also an occasion to talk, among family members and friends, in a relaxed atmosphere and create new confidence.