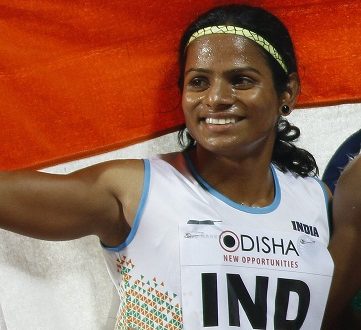 in National April 8, 2021 Comments Off on First Edition Chhattisgarh Veerni Awards Recipients Announced:Dutee Chand from Odisha in the list 514 Views

New Delhi:8/4/21: The Chhattisgarh Government announces the first edition of Chhattisgarh Veerni Awardees to be held on Ambedkar Jayanti, 14th of April, 2021, via a virtual ceremony.

These awards have been instituted by Smart City, Raipur led by Mr. AijazDhebar, Mayor- Raipur, and will be presented by the Hon’ble Chief Minister Mr. BhupeshBaghel.

The awardees will be presented with a hamper that celebrates local folk arts, handicrafts,s, and artisans. The government has worked with a master artisan and especially designed and commissioned a trophy in the Dokra Tribal Art antique lost wax method. This statue depicts a woman crowning herself and is symbolic of the government’s commitment to work to level the playing field for women. Shawls and sarees have been commissioned from the state-run women’s handloom cooperative, and celebrate the rich tradition of the region’s famous Tussar and Kosa Silk in exclusive designs. In addition to showcasing the extraordinary traditions of the state, these shawls and sarees tell multiple other important stories.

The awards were announced on the 8th of March 2021, on the occasion of International Women’s Day, followed by the release of the list of recipients in the month of April 2021. The awards symbolise the Hon’ble Chief Minister’s affirmation that the government of Chhattisgarh remains resolute towards the cause of empowering and celebrating women in Indian and Chhattisgarhi society. They signify a core idea: that a nation, economy, and society can only progress when women progress. These awards also emphasise the urgent need for a greater representation of women in every field.

“On the 8th of March, 2021, to mark International Women’s Day, the Chhattisgarh strengthens its resolve to create a state where women are free, empowered, included, and celebrated every single day of every single year. Our government has initiated programs and policies that focus on women’s needs and attempt to level the playing field for them. On this date, we will renew our pledge to keep women’s interests on our minds while making policies in every sector.

It is our firm belief that empowering women with education, resources, and rights will enable our economy, our society, our families and our culture to scale the heights of glory. Women have the capacity to nurture and lead and it is imperative that we help them to equip themselves to achieve their full potential. As part of this effort, we announce an award to recognize the contributions made by women in the state of Chattisgarh. We will also take the opportunity to honour women who have set examples across the country.

We hope this endeavour will inspire more women to rise up as leaders in their chosen fields and more men to be their allies.

The ceremony will take place on the birth anniversary of ShriBhimraoAmbedkar and also honour his immense contribution to nation-building and the rights of Dalits and women.”

Below is the list of awardees from Chhattisgarh and other states of India.

Awardees from the other States of India

AmitaShriwas for her contribution to the field of sports: An Anganwadi worker at Champa, Shriwas has scaled Mount Kilimanjaro, the world’s highest free-standing mountain and Africa’s tallest peak at 5895 meters. She did so while carrying 25 kilos, over five nights. The message she sent out to the world after reaching the summit was “Gadhbo Nava Chhattisgarh” (or “We Will Build A New Chhattisgarh”).

SavitaAwasthi for her contribution to the fields of law and legal literacy: A lawyer who runs legal aid camps and raises awareness about women’s rights, working tirelessly to increase legal literacy; She fights cases for women-in-need for free. She is also a member of the Child Welfare Committee of the Women & Child Development Department and works to protect poor children and ensure their rights are preserved. She offers free counseling, on their legal rights, to women detained in police stations.

Teejanbai for her contribution to the field of performing arts:  A living legend, she has been performing the Mahabharata for last several decades, as an exponent of Pandavani, a traditional art form from Chhattisgarh.  She is the winner of Padma Shri, Padma Bhushan, Padma Vibhushan, and SangeetNatakAkademi Award.

Ankita Gupta for her contribution to the fields of women empowerment and public service: A female constable in the District Police Force in Kabirdham, she is associated with athletics and has represented Chhattisgarh in the police meet. Currently, she teaches karate to girls in Kawardha and trains women for recruitment in the Police Department.

Chhattisgarh is a state with the greatest percentage of women MLAs in its assembly, as compared to other Indian states. The Chhattisgarh government is committed towards working for the education, employment, health, and social and economic self-reliance of women in Chhattisgarh and has consistently introduced policies to this effect.

2021-04-08
Editor in chief
Previous: Odisha requests Railway Board to cancel all passenger carrying trains coming from Chhattisgarh
Next: History of Odisha represents the historical strength of entire India: PM