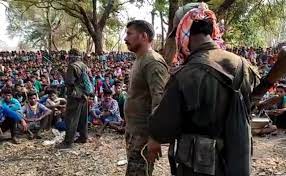 New Delhi :8/4/21: Central Reserve Police Force (CRPF) personnel Rakeshwar Singh Manhas, who was kidnapped by the Naxals after the deadly gunfight with the security forces in the jungles of the Bijapur and Sukma districts on April 3, has been released by the Maoists, said the Chhattisgarh Police on Thursday.

After his release, Singh was brought to CRPF security camp near Basaguda in the Bastar region. Meanwhile, Singh’s wife Meenu said that she has received official communication, adding that the CRPF commando is in good health.

“Today is the happiest day of my life. I always remained hopeful of his return. I thank the government,” she said.

This comes hours after the Chhattisgarh Police said that there have been “positive developments” in their efforts to rescue Singh, who is a commando of CRPF’s 210th battalion of Commando Battalion for Resolute Action (CoBRA)

.On Tuesday, the banned Communist Party of India (Maoist) had released an open letter in which it had confirmed that Singh was in their custody and had asked the central and state governments to name mediators for his release. However, the Maoists didn’t raise any formal demands for the release of Singh.”We are ready to negotiate with the government. They can announce mediators. We will release him (captive jawan). Police jawans are not our enemies,” the Naxals had said in their letter.

Manhas was a part of the anti-Naxal operation that was launched by the CRPF and state police earlier this month in jungles on the Bijapur and Sukma border. However, 22 security forces personnel lost their lives in the operation after the Naxals ambushed them in the forest.

Out of the 22, eight were from the Central Reserve Police Force (CRPF), including seven CoBRA commandos and one jawan of its ‘Bastariya’ battalion, eight from the District Reserve Guard (DRG) and six from the Special Task Force (STF).

Later, Union Home Minister Amit Shah visited the area where the encounter took place and met the injured personnel. He also warned that the central government intensify its operations against the Naxals and said that the sacrifice made by the troops will not go in vain. He also held a high-level meet with the state officials, including Chief Minister Bhupesh Baghel, to discuss the government’s future strategy.

“Both Central and state governments are working in tandem on two fronts — intensify development works in tribal areas and fight against armed groups. I want to assure the people of Chhattisgarh and the country that the fight against Naxals will be intensified after this incident,” Shah had said.

2021-04-08
Editor in chief
Previous: Madhusudan Law College To Become Odisha’s First State-Run Law University
Next: COVID-19 cases across Odisha as many as 700 vaccine session sites have been shut in state