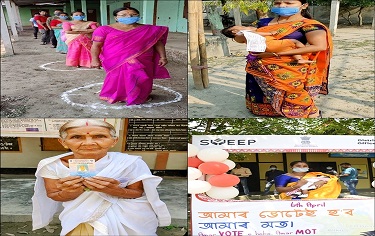 in National April 6, 2021 Comments Off on Single phase polling underway in TN, Kerala and Puducherry Assembly & also in WB 225 Views

Newdelhi:6/4/21:Polling for the single-phase elections in Kerala and Tamil Nadu, as well as the Union Territory of Puducherry along with the Lok Sabha by-polls for Kanniyakumari seat in Tamil Nadu and Malappuram seat in Kerala is progressing smoothly. Polling is also being held in Assam and West Bengal for the Third Phase of Assembly Elections.

All the necessary facilities and security arrangements have been made to ensure free and fair polling during this phase. The Voter Verifiable Paper Audit Trail (VVPAT) is being used along with Electronic Voting Machine (EVM) at every Polling Station, with a view to enhance the transparency and credibility of the election process. The polling is being conducted till 6.00 P.M. in Assam while it will continue till 6.30 P.M. in West Bengal. In case of Puducherry, Tamil Nadu and Kerala, polling will continue till 7.00 P. M. barring the Left-Wing Extremism affected areas where it will be held till 6.00 P.M.

In view of the prevailing COVID-19 pandemic, the option of Postal Ballot facility has been extended to the electors who are COVID- 19 positive or suspect as certified by competent authority and are in-home or institutional quarantine along with those marked as Persons with Disabilities (PwD) and above the age of 80 years.

In Tamil Nadu, total 3,998 candidates including 411 women and two Third Gender persons are vying for the 234 Assembly seats spread over 37 districts during the single phase. Over 6.28 crore voters including 3.19 crore women and 7,192 Third Gender persons will decide the fate of these candidates. Total 88,936 Polling Stations have been set up for this purpose. Besides, the Lok Sabha by-polls will be conducted simultaneously for Kanniyakumari seat in Tamil Nadu where there will be 12 candidates in the fray and also for Malappuram seat in Kerala where six candidates will be taking part in the electoral battle.

In the Union Territory of Puducherry, 324 candidates including 35 women are vying for 30 seats in four districts during the single phase. AIR Puducherry Correspondent reports that Over 10.04 lakh voters including 5.31 lakh women and 116 Third Gender persons will decide the fate of these candidates. Total 1,559 Polling Stations have been set up for this purpose. A report:

In West Bengal, 205 candidates including 13 women are vying for 31 seats in three districts during the Third Phase. The state is witnessing eight-phase elections. Over 78.52 lakh voters including 38.59 lakh women and 246 Third Gender persons will decide the fate of these candidates. Total 8,480 Polling Stations have been set up for this purpose.

In Assam, 337 candidates including 25 women are in fray for the 40 Assembly Constituencies spread over 12 districts going to polls during the Third and Final Phase. Our Gauwhati Correspondent reports that a total of 11,401 Polling Stations have been set up for this purpose.

Now we go over live to our Guwahati Correspondent Manas to get the latest updates on the polling going on in Assam.

2021-04-06
Editor in chief
Previous: Union Home Minister Amit Shah paid tributes at Jagdalpur to the brave security personnel who were martyred while fighting the Naxalites in Chhattisgarh
Next: Indian Medical Association has urged the centre to open up vaccination for everyone above 18 years