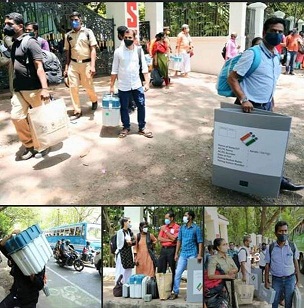 in National April 6, 2021 Comments Off on Polling in Kerala, Tamil Nadu, Puducherry and for Phase 3 Assembly Constituencies in Assam and West Bengal conducted peacefu 233 Views

Newdelhi:6/4/21:Polling was conducted peacefully in1,53,538 Polling Stations spread across 475Assembly Constituenciestoday, in the states of Kerala, Tamil Nadu, Puducherry and for third phase of Assam and West Bengal. The number of Polling Stations has increased in view of the fact that the number of voters per polling station has been reduced from 1500 to 1000 keeping social distancing norms in view.

Details of Electors, Polling stations & Observers in the poll are as follows:

To ensure inclusive and accessible elections, ECI has extended the option of postal ballot facility to PwDs, Senior Citizensabove the age of 80 years, COVID-19 suspect or affected persons and persons employed in essentialservices. The Observers at the ground level oversaw that proper arrangements for facilitation were made available for these voters. Details of PWD Electors and 80+ Electors are as follows:

As per standard procedure all these EVMs and VVPATs had already undergone First Level Checking, Randomisation, and Commissioning in the presence of Political Parties/Candidates agents. During FLC and during commissioning each of these EVMs and VVPATs had undergone mock polls. Today before the start of the poll each of the EVMs and VVPATs again underwent a mock poll in the presence of polling agents of the candidates with minimum 50 votes cast on each, as per standard procedure. At the end of the mock poll the result of EVM were matched with the result of VVPAT slips and shown to the polling agents. Non-functioning rate during the mock poll is lesser than comparable / experienced in last few polls.

As a major push for conducting free and fair elections, live monitoring and webcasting of more than 50% of Polling Stations including critical and vulnerable polling booths has been put in place as per ECI norms, to ensure safe and secure atmosphere in polling areas. Commission, CEOs, DEOs, Observers could watch live streaming and keep a close watch on these polling booths.

As per Commission’s instruction police officials including CAPF personnelwill not go inside the polling booth unless required by Presiding Officer due to law and order problem. It is the standing instruction of the Commission that outsiders will not be allowed in the areas of poll going assembly constituencies during the silence period i.e. 48 hours before the end of polling hours. The Commission had reiterated this instruction in briefing of DEOs and police officials. These guidelines were strictly

During the ongoing elections till this phase,a record seizure of Rs. 947.98 Crore has already been achieved from the five states as on April 6, 2021. The seizure figure, which includes seizure of cash, liquor, narcotics, freebies etc., is more than 4.198 times higher than the total combined seizure of Rs. 225.77 Crore in GE LA 2016. The Commission has been laying specific emphasis on inducement free elections and curbing the malaise of undue money power, liquor, freebies. For effective monitoring a total 4606 Flying Squads (FS) and 4670 Static Surveillance Teams (SST) were operationalised to check movement of cash, liquor, drugs & freebies in these states/UT closely supervised by DEOs, Expenditure observers in Districts and Special observers. A total 19 Air Intelligence Units (AIU) of IT Department are also set at different stations in Assam, West Bengal, Kerala, Tamil Nadu and Puducherry.

State wise and item wise break up of seizure report as till 06.04.2021 Forenoon