Addressing the occasion, the Vice President said that Gandhi’s iconic Dandi Salt March was a watershed moment in our freedom struggle. Shri Naidu said that it altered the course of history. “The Dandi March we are symbolically revisiting today signifies our nation’s ability to stay united when we are faced with challenges”, he said 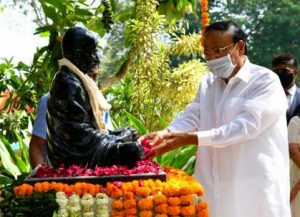 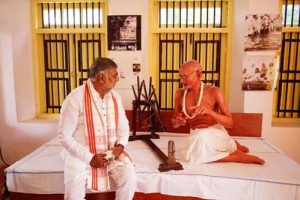 The Vice President asked everyone to take inspiration from Mahatma Gandhi who always used polite and respectful language even for his opponents. “Gandhi Ji’s principle of non-violence was not limited to physical violence alone, rather it encapsulated non-violence in words and thoughts too”, he said.

“Azadi Ka Amrit Mahotsav”—a 75-week festival to commemorate 75 years of India’s Independence, was flagged off by the Prime Minister, Shri Narendra Modi from Sabarmati Ashram, on March 12, 2021. The festival celebrates the rapid strides India has taken in the past 75 years. The Vice President said that it is a festival that encourages us to rediscover our hidden strengths and prompts us to take sincere, synergistic action to regain our rightful place in the comity of nations.

Click here for full details of the address of Vice President

Addressing on the occasion, the Minister of State(IC), for Culture and Tourism Sh. Prahlad Singh Patel said that 91 years ago, Mahatma Gandhi started this journey for the awakening of self-reliance and self-respect of the country, and now 91 years later, the symbolic Dandi Yatra which started on 12th March marks the revival of our journey of self-reliance and self-respect. However, this journey does not end here, it is the beginning of Azadi ka Amrit Mahotsav.

2021-04-06
Editor in chief
Previous: Odisha Government appraised the Centre on the shortage of Covishield vaccine in the state
Next: Polling in Kerala, Tamil Nadu, Puducherry and for Phase 3 Assembly Constituencies in Assam and West Bengal conducted peacefu