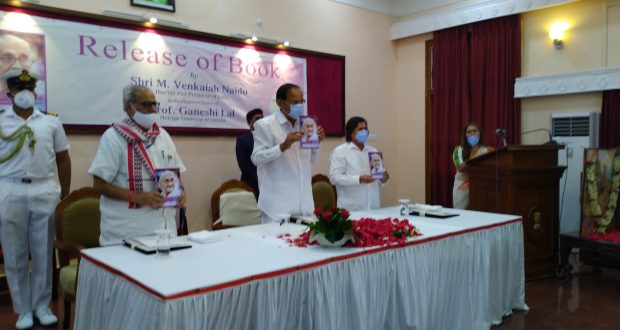 Written by KIIT and KISS founder and Kandhamal MP Dr. Achyuta Samanta, the book speaks about his mother’s struggles and how she raised her seven children despite poverty

In his speech, the Vice President said “When I was going through the book, I could not but feel enormous respect and reverence for a mother who fought every odd to singlehandedly raises her seven children. Despite abject poverty and lack of resources, she ensured that all her children got a good education and became responsible citizens. I was moved by the account of Dr. Achyuta Samanta’s father’s death.”

Paying rich tributes to Smt. Neelimarani, the Vice President said that despite abject poverty and lack of resources, she ensured good education to her children and kept working for the upliftment of the poor and downtrodden. He expressed happiness over the fact that with the help of her sons, Smt. Neelimarani Ji turned her native village Kalarabanka into one of the first smart villages of its kind in the country. Calling this very inspiring, Shri Naidu wanted others to emulate her and work for the betterment of people’s lives in their native places.

The Governor of Odisha, Prof. Ganeshi Lal and Lok Sabha member, Dr. Achyuta Samanta were among those who were present at the event.