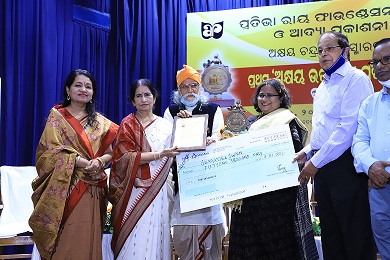 Bhubaneswar:2/4/21: The First Akshaya Upanayasa Puraskar, instituted by the Pratibha Ray Foundation Trust was conferred on writer Swagatika Swain for her novel “Drohakala” in an elegant ceremony at Jaydev Bhawan, Bhubaneswar.on 30th March. The award has been instituted in memory of eminent engineer Shri Akshaya Chandra Ray, the founder of renowned publishing house Adya Prakashani. Vice-president of the Trust, Dr Adyasha Das presented the profile of the Trust, its multi-pronged objectives and informed that the award coincided with the forty-seventh Birth anniversary of Adya Prakashani, the Trust’s publication house. The award included a cash prize of Rs 51,000, a citation, and a memento.

Speaking on the occasion, the Chief Guest, Shri Niranjan Rath said it was a blessing to receive an award instituted by the Trust of Jnanpith laureate Pratibha Ray. He said the award would encourage young writers to choose novel writing as their creative genre. The Guest of Honour, Shri B.B.Mishra, eminent writer and ex-Director General of Police extolled the virtues of Late Akshaya Chandra Ray and praised the endeavor of the Trust to create this opportunity for young writers. Engineer Pravakar Swain elaborated on the life and achievements of the Founder of Adya Prakashani Shri Akshaya Chandra Ray. Dr. Basant Panda discussed the significance of “Drohakala”, the award-winning novel. Shri Lalit Das, Additional Director General of Police and patron of the Trust presented a profile of the trustees and patrons and the plans of the Trust for the promotion of Odia literature. 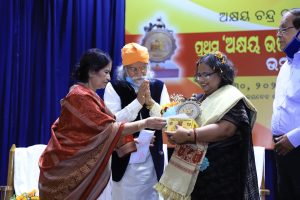 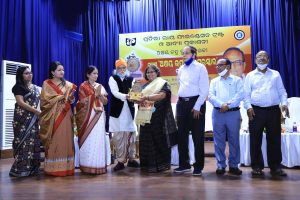 Eminent writer, Dr.Pratibha Ray, President of the Trust stated that theTrust conceived of this award to recognise young writers and encourage more such talents in the field of novel writing in OdiaWell-known writer Shri Debaprasad Das’s excellent hosting was greatly appreciated by all. Ishani Das, Secretary. Pratibha Ray Foundation Trust presented the vote of thanks.

Many literary luminaries attended the function which will be an annual affair.

2021-04-02
Editor in chief
Previous: Odisha government directed all government and private hospitals to conduct COVID-19 vaccination during holidays in April.
Next: Tata Steel BSL has observed Utkal Dibasa : The foundation day of Odisha