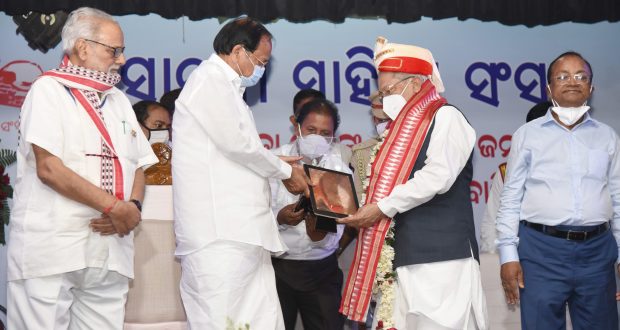 Cuttack:2/4/21:Andhra Pradesh Governor Biswa Bhusan Harichandan has been conferred the ‘Kalinga Ratna’ award for the year 2021. The award instituted by Sarala Sahitya Sansad was presented to Governor Biswa Bhusan Harichandan by M. Venkaiah Naidu, Vice President of India, during the 600th Birth Anniversary of Adikabi Sarala Das and 40th Annual Celebrations of Sarala Sahitya Sansad during the programme held at Sarala Bhawan in Cuttack today, 02.04.21. The Kalinga Ratna award carried a silver statue of Goddess Saraswati and a copper plaque.

Vice President Venkaiah Naidu described Sarala Das as Adi Kavi and a genius in the field of Odia literature. The Vice President said ‘Sarala Mahabharat’ written by Sarala Das in the 15th century, the first complete Mahabharat in a regional language, is a classic example of popularity and adoption of literature in the spoken dialect. Vice President Venkaiah Naidu has congratulated Andhra Pradesh Governor Biswa Bhusan Harichandan on conferring the Kalinga Ratna award. Speaking on the occasion, Andhra Pradesh Governor Biswa Bhusan Harichandan has said literary works should be in a manner to make it attractive to children and anything learnt in one’s mother tongue will never be forgotten. Literature learnt during one’s childhood leads them to their personality development at a later stage, said Governor Harichandan. Governor Biswa Bhusan Harichandan said Sarala Das was an excellent literary genius of the 15th century who is well known as Adi Kavi, who contributed to epic literary works in Odia in a spoken dialect easily read and understood by everyone.

Biswa Bhusan Harichandan was also a cabinet minister in the BJD-BJP led coalition government in 2004. In July 2019, he was appointed as the 23rd Governor of Andhra Pradesh. The veteran politician has also authored several books including ‘Matrubhasa’, ‘Bhasa Jhalaka’, ‘Rana Pratap’, ‘Astasikha Manasi’ and ‘Sangrama Sarinahi’.