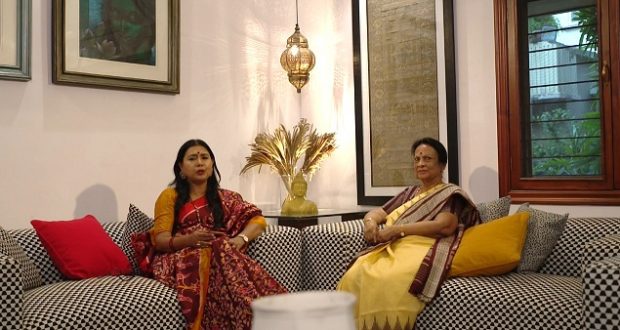 Virtual ‘International Odisha Parba-2021’ Concludes With Much Splendor And Vigour

in National March 28, 2021 Comments Off on Virtual ‘International Odisha Parba-2021’ Concludes With Much Splendor And Vigour 318 Views

New Delhi, 28.3.2021: The first-ever virtual ‘International Odisha Parba-2021’ organised by Odia Samaj, New Delhi, was concluded successfully today with much pomp and spectacle. The 2nd day of the extravaganza witnessed a congregation of humungous numbers of audience worldwide. This magnificent virtual festival allowed the audience to experience the rich art, culture, dance, music, and heritage of Odisha to the Odia Diaspora worldwide in a unique way.

The concluding evening kick started with the “Fusion Chauu Dance” performance on ‘Pancha Mahabhoota’ by Chandrakanta Sutar’s group. Shri Dinesh Patnaik, Director General, Indian Council for Cultural Relations in his message appreciated the commendable work being done by Odia Samaj, New Delhi in taking rich Odia culture and heritage to the world. A short film based on the historical “Paika Bidroh” mesmerized the global audience through its powerful picturisation. This was followed by a message shared by Shri Bhatruhari Mahatab, MP, Lok Sabha who spoke about important role being played by Odisha Parba in last four years in popularizing Odia culture. The virtual Odisha Parba also showcased a spectacular performance from Odisha’s most ancient and remarkable tribes, “Bonda Tribal Dance”. Later, Paralympics shuttler Pramod Bhagat opened up about his struggles and experiences in the ‘Manara Katha’ programme. The audience thoroughly enjoyed and got mesmerised by the Cultural programme presented by the “All Russia Odia Samaj Moscow”. Supreme Court Lawyer Shri Sarthak Nayak, Padma Shri Dr Ramakanta Panda and Padma Shri Priyambada Mohanty Hejmadi inspired the audience with their life stories within the talk-show named “In conversation with”.

To promote local Odia weavers by displaying various handlooms, a Fusion Dance was presented by the Odia Society, UK, on Virtual Odisha Parba. A short AV programme on Bajashaal from Kalahandi and an Odissi performance by Bichitrananda Swain’s group on “Taal Tarang” enthralled the audience and was full of entertainment.

The last day of Virtual Odisha Parba ended with an enticing Musical programme, “Sura Jhankar”. It was helmed by renowned Odia singers: Tapu Mishra, Swayam Padhi, Tariq Aziz and Sohini Mishra. Also a medley song was presented by Sujit Kumar of Mumbai Odia Group which charmed the audience.The programme was concluded with a vote of thanks.

2021-03-28
Editor in chief
Previous: India crosses a Landmark Milestone of over 6 cr vaccine doses administered
Next: Odisha Chief Minister laid the foundation stone for the re-development of Kalinga Studio