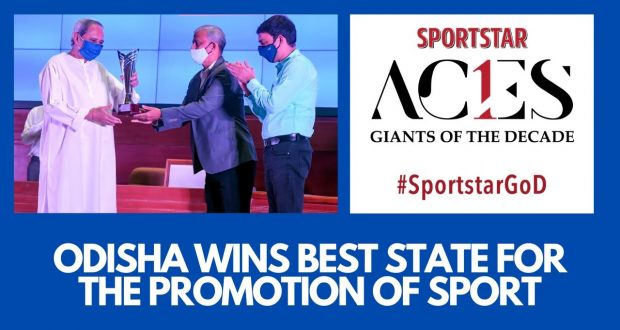 Bhubaneswar:28/3/21:The Odisha State authorities has received the Best State for the Promotion of Sport honour within the 2021 version of the Sportstar Aces Awards. This is the state’s third win in a row within the Sportstar annual awards, having received the award in 2019 and 2020 as nicely.

The Chief Minister of Odisha, Naveen Patnaik was honoured by Ayon Sengupta, editor of Sportstar. MM Somaya, Olympic gold-medallist and Aces Awards jury member and LV Navneeth, CEO of The Hindu Group in a ceremony on the Lokaseva Bhavan in Bhubaneswar on Sunday. “It’s indeed a moment of great pride for us in Odisha to be honoured as the Best State for Promotion of Sport for the period 2011-2020. I humbly accept this award on behalf of the people of Odisha. I thank the eminent jury headed by renowned cricketer Sunil Gavaskar for choosing Odisha for this award,” Patnaik mentioned via a video message. “For generations in India, Sportstar was the window to the world of sport. It has been a source of inspiration and motivation for decades before the era of television and the internet. I am happy that Sportstar is continuing its rich tradition of promoting and recognising achievements in sport,” he added. Odisha has made sports activities a precedence sector with funding swelling from Rs 28 crore in 2010- 11 to Rs 301 crore in 2020-21

Odisha has taken purposeful strides in the last decade to strengthen its credentials as a sports hub with world-class infrastructure across disciplines. Over the last decade, the eastern Indian state has been at the forefront of hosting major sports events, sponsoring national teams, creating a number of high-performance centres and strengthening its grassroots programmes.

Besides hosting marquee events and developing infrastructure for key disciplines such as Athletics, Hockey, and Football, Odisha signed MoUs with leading corporates and eminent sports personalities in November 2018 to set up High-Performance Centres (HPCs) in disciplines where Odisha does well and has the potential to excel.

This is the state’s third Sportstar Aces honour in a row, having won the award in 2019 and 2020 as well.

2021-03-28
Editor in chief
Previous: Odisha Chief Minister laid the foundation stone for the re-development of Kalinga Studio
Next: Congress nominated Ajit Mangaraj as its candidate for Pipili bypoll