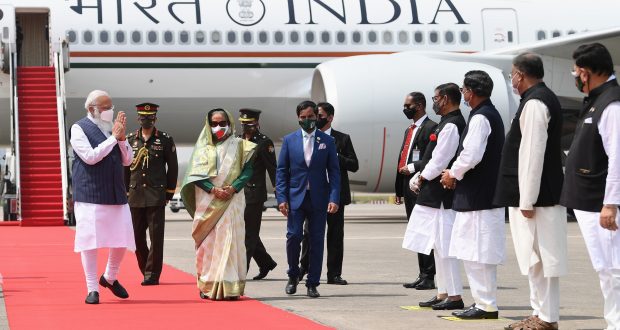 in National March 26, 2021 Comments Off on Prime Minister Narendra Modi arrived in Bangladesh on a two-day visit 228 Views

Dhaka:26/3/21:Prime Minister Narendra Modi arrived here on Friday on a two-day visit to Bangladesh during which he will attend the celebrations of the golden jubilee of the country’s independence, the birth centenary of Bangabandhu Sheikh Mujibur Rahman and hold talks with his counterpart Sheikh Hasina.

Modi, who is visiting Bangladesh on his first trip to a foreign country since the outbreak of the coronavirus, was received by Prime Minister Hasina at Dhaka’s Hazrat Shahjalal International Airport upon his arrival.

The Prime Minister travelled to Dhaka on the newly-inducted custom-made Boeing 777 aircraft. He wore his mask before alighting from the aircraft and exchanging pleasantries with Hasina.

He received a guard of honour at the airport.

The Prime Minister had on Thursday said that he would hold substantive discussions with Hasina during the visit, as he expressed happiness that his first foreign tour after the onset of the COVID-19 pandemic would be to a friendly neighbouring country with which India shared deep ties.

“Our partnership with Bangladesh is an important pillar of our Neighbourhood First policy, and we are committed to further deepening and diversifying it. We will continue to support Bangladesh’s remarkable development journey, under Prime Minister Sheikh Hasina’s dynamic leadership,” Modi tweeted ahead of his visit. 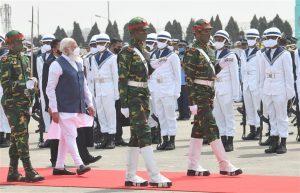 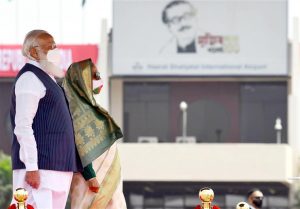 He wrote that he was looking forward to remembering the life and ideals of Bangabandhu Sheikh Mujibur Rahman, and celebrate 50 years of Bangladesh’s War of Liberation, as well as our diplomatic ties.

Modi is scheduled to go straight to the National Martyrs’ Memorial in Savar from the airport to pay tributes to the 1971 Liberation War martyrs.

Shortly afterwards, he will visit the Bangabandhu Memorial Museum at Dhanmondi 32, originally the Bangladesh founder’s private residence, to pay homage to his memories.

Later, Modi will join the celebration programme as the guest of honour at the National Parade Square. Bangladesh President Abdul Hamid will be the chief guest at the function, which would be chaired by Prime Minister Hasina.

In the evening, Modi is scheduled to inaugurate the Bangabandhu-Bapu Museum jointly with his counterpart at the Bangabandhu International Conference Centre. He will also attend a state banquet hosted in his honour by Hasina.

On Saturday, Modi will visit the mausoleum of Bangabandhu Sheikh Mujibur Rahman at Tungipara in Gopalganj district, the first Indian dignitary to ever visit the place.

He is also scheduled to visit the Jeshoreshwari and Orkandi temples in southwestern Shatkhira and Gopalganj on Saturday.

On Saturday afternoon, Modi will hold talks with Hasina at the Prime Minister’s Office, where at least five MoUs are expected to be signed and a number of projects inaugurated virtually.

Later, he will meet President Hamid at Bangabhaban presidential palace before leaving for New Delhi in the evening.

Modi’s visit is taking place at a time Bangladesh is commemorating Mujib Borsho, the birth centenary of Sheikh Mujibur Rahman and 50 years of the country’s war of liberation. The two countries are also celebrating 50 years of the establishment of diplomatic ties. PTI

2021-03-26
Editor in chief
Previous: First phase of assembly elections to be held in Assam, West Bengal tomorrow
Next: America & its allies to hold Beijing accountable on Taiwan, South China Sea and other issues: Joe Biden