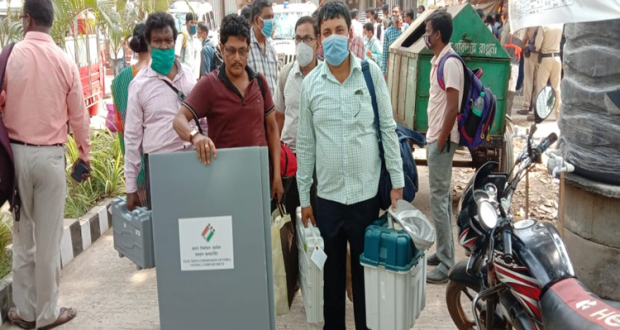 First phase of assembly elections to be held in Assam, West Bengal tomorrow

in National March 26, 2021 Comments Off on First phase of assembly elections to be held in Assam, West Bengal tomorrow 283 Views

Newdelhi:26/3/21:Campaigning for the first phase of polls in Assam concluded last evening and Voting will be held tomorrow for 47 assembly constituencies. People will exercise their right to franchise in more than eleven thousand five hundred and thirty polling booths spread across the State.

As the intense election campaigning has subsided from last evening, now all turned to the voters of Assam who will decide the fate of contesting candidates in the voting process to be held tomorrow in the first phase election in Assam.

The concerned district administrations has set up all necessary polls related structures and polling personals started journey to their designated polling stations.

Meanwhile, the police have also intensified patrolling and checking in various places to avoid any unwanted situation. The Assam Assembly Election will have three phases and the counting will be held on 2nd May.

The Election Commission is fully geared up to conduct safe, smooth and peaceful polls on Saturday in the first phase in Assam. Polling will be held in 47 seats in this phase.

50 percent polling stations will be covered through a web casting system in Assam. Participating in an AIR talk show last night, Joint CEO Rahul Chandra Das said that webcasting will be arranged especially in the vulnerable, critical and sensitive polling stations, and in those polling stations having large numbers of electors.

He said that all arrangements are put in place to ensure free , fair and safe polling. Mr. Das informed that special emphasis has been given to ensure voters safety in the wake of Covid 19.

Similarly, polling will also take place in 30 assembly constituencies of Five districts of West Bengal tomorrow under the first phase of election. These districts are East Medinipur, West Medinipur, Purulia, Jhargram and Bankura. The Election Commission is all set to conduct the polls smoothly.Polling parties will reach polling stations by this evening. AIR correspondent reports that security has been briefed up in those places where polling is scheduled tomorrow.

Meanwhile, senior leaders of BJP, Trinamool Congress and Sanyukta Marcha have shifted their election campaign in those constituencies where polling will take place in the second and third phase.

2021-03-26
Editor in chief
Previous: JEE Main-2021 (March Session) have been :Debasish Panda has emerged as topper in Odisha.
Next: Prime Minister Narendra Modi arrived in Bangladesh on a two-day visit